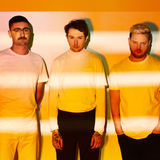 “alt-J and Terrace Martin are two artists I respect immensely, so I was honoured to tell a story with them on this new album of RELAXER reworks,” says GoldLink of the track.

“This record is special to me because it truly reflects freedom and what it means to have no boundaries,” explains Terrace Martin. “I actually produced this record in Poland fueled by nothing but a cup full of espresso.”

“The point of the video is for the viewer to set the story. Just listen to the music, enjoy, and let the art take you on a trip.” adds Jay Fury.

REDUXER is a set of 11 genre-straddling reinterpretations of songs from alt-J’s award winning third album RELAXER, reimagined by a host of fans, friends and peers, including a globe-straddling cross-section of some of the world’s most influential and prolific hip hop artists and producers. The project also features Deadcrush (feat. Danny Brown) (The Alchemist x Trooko Version), 3WW (feat. Little Simz) (OTG Version) and In Cold Blood (feat. PushaT) (Twin Shadow Version). All songs are available as instant grats.
REDUXER out 28th September 2018

alt-J have announced REDUXER, a set of 11 incredible reinterpretations of songs from their award winning third album RELAXER, reimagined by a host of fans, friends and peers, including a globe-straddling cross-section of some of the world’s most influential and prolific hip hop artists and producers.

The project was first hinted in July when Virginia Beach hip hop superstar Pusha T and LA synth pop polymath Twin Shadow both joined alt-J for a surprise performance of In Cold Blood on The Late Show With Stephen Colbert, before swiftly releasing the studio version of the collaboration. “It's no secret that we love and are influenced by hip-hop, and it's always been a dream of ours to work with hip-hop artists in reimagining our music,” the band explained. “With REDUXER that dream has come true. We couldn't be happier with the results. This album is truly global, featuring rappers and producers from all over the world. After a very long time in the making, we are stoked to share it with you all.”

4. Hit Me Like That Snare (Jimi Charles Moody Version)

alt-J - one of the most successful British bands of the millennium - are Joe Newman, Gus Unger-Hamilton and Thom Green. Released last year, RELAXER flew straight into the top 10 of the UK album chart ahead of a summer of major international shows, including a headline show at London’s O2 Arena; and headline performances at numerous festivals. RELAXER is the follow up to their number one, GRAMMY and BRIT Award-nominated album This Is All Yours, and their 2012 Mercury Prize and Ivor Novello Award-winning debut An Awesome Wave. Between them, the records have sold in excess of two million copies and their songs have been streamed more than one billion times. RELAXER is available now via Infectious Music in heavyweight vinyl, CD, cassette and digital formats.