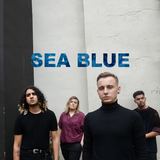 Fresh off the back of their sold out, sweat-soaked and triumphant headline show at London Borderline, BLOXX have dropped a brand new banger ‘Sea Blue’. It’s the latest to come from the Uxbridge four-piece who are gearing up to release their debut EP ‘Headspace' early next year on Chess Club.

‘Sea Blue’ comes as the fascinating, boundless four-piece round off their biggest ever headline tour of the UK, playing an impressive 22 x dates. Feedback has been tremendous from fans and critics alike, as it becomes even more strikingly obvious how talented this young band are. ‘Sea Blue’ is yet another delicious slice of enthralling indie that bursts to the seams with the type of energy that only Bloxx are capable of.

‘Sea Blue’ will sit alongside previously shared Radio 1 championed ‘Lay Down’ and ‘Monday’ on the band’s debut EP, due for release on Chess Club next year. The band have also announced a fresh run of tour dates (below) to look forward to next year – bigger venues, bigger crowds beckon for a band with their sites set firmly on the top.