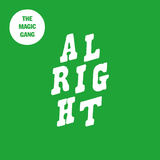 “They sound like a cheerful, melodic as fuck amalgamation of bands like Avi Buffalo and The Smith Westerns and the very best pop groups from the 1960s.” – Noisey

“[A] distinctly British take on the slacker pop sound of the likes of Mac DeMarco, Weezer and Pavement.” – NME

“In creating pop with an outsider’s sensibility but an optimist’s spirit, The Magic Gang make a pretty good case for the guitar band being alive and well.” – The Times

“The Magic Gang have cruised their way into becoming one of Britain’s most effortlessly exciting bands.” – DIY

“They’re continuing to set themselves up as one of the most exciting new bands in the world.” – Dork

“The Magic Gang have what it takes to drop a fuzzy pop banger.” – So Young

The Magic Gang’s career is still young, yet every release brings a new wave of tips predicting that the Brighton quartet have the indie-pop anthems to make them the nation’s next breaking guitar band. Informed by a rich vein of inventive power-pop stretching from Weezer to Mac DeMarco via The Beach Boys, the band have today shared their latest track ‘Alright’.

As much as The Magic Gang’s songbook is the driving fact behind their upwards momentum, their live shows are proving to be an equally important factor. From festivals such as Glastonbury, Reading, Leeds and The Great Escape to tours with Wolf Alice, Hinds, Swim Deep and Spring King, The Magic Gang’s infectious enthusiasm wins over new converts every time they hit the road. After starting the year by being included in Apple Music’s New Artists 2017 and VEVO’s dscvr lists, their subsequent Radio 1 support has included three playlisted Hottest Records at Radio 1 with support from MistaJam, Annie Mac and Huw Stephens.

The Magic Gang are currently completing a tour as guests with Sundara Karma before they hit Europe as support to their old touring pals Wolf Alice: