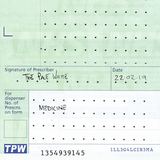 Where band is from: 3-piece from Newcastle-Upon-Tyne
Artist Twitter handle: @thepalewhite
Artist Facebook Page: facebook.com/thepalewhite
The Pale White are excited to share their new track ‘Medicine’ released on February 22nd 2019.

With a fantastic review from The Independent comparing them to US rock royalty Queens Of The Stone Age, the groups reputation as an unmissable live act has started to spread. Opening for the likes of The Amazons, Twin Atlantic, The Libertines, Sam Fender and Band of Skulls, the band are developing a passionate word of mouth following as one of the most exciting new British bands around.