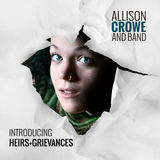 When critics liken you to Edith Piaf, Elton John, Aretha Franklin and Modest Mussorgsky, it’s a good sign you’re truly one-of-a-kind. So it is with musical explorer Allison Crowe who, since creating her own record label in 2001, uniquely inhabits the world of song – continually adding breadth and depth to a richly expressive repertoire for piano, vocals, guitar and bodhran. Crowe’s “supernaturally agile and exquisite voice” is complemented ideally by her international touring band: Céline Greb (cello, vocal harmonies); Sarah White (mandolin, vocal harmonies); and Dave Baird (bass). Longtime friend, musician and photographer Billie Woods contributes guitar and vocal harmonies to the band’s recordings. The combo’s gorgeously thrilling hybrid of Canadiana, Celtic, jazz, roots, folk, soul and original rock bridges vital originals with fresh interpretations of classics by Annie Lennox and Gary O'Driscoll. Alongside multi-genre concert and recording projects over this past year the Nanaimo-born, Newfoundland-based artist’s active as music curator and arranger for acclaimed stage productions of: Atlantic Canada’s folk and popular song; the collaborative works of Bertolt Brecht & Kurt Weill; and choral renderings of traditional Christmas carols. A singular artistry and virtuosity make Allison Crowe performances legendary - and fun. In the Scottish Highlands she brought down the house on a bill with Carol Ann Duffy, Britain’s Poet Laureate, and Sir Peter Maxwell Davies, the Master of the Queen's Music. In Hollywood Superman movie director Zack Snyder is outspoken in his respect and admiration. Touring with Canada’s Royal Winnipeg Ballet audiences responded with spontaneous standing ovations. "The most honest, heartfelt, and directly intimate concert in my entire life,” says longtime American public broadcaster Ross Hocker. “Allison has a special gift that is so very rare in musicians today. She is true to her mind, heart and spirit. She also has a most wonderful humor which envelops her audience." "Soulful. Alive. Joyous. Grievous. Real, true, music is what I want to make," sums up Allison Crowe. "Heirs + Grievances" is the debut studio album of Allison Crowe and Band (and the 20th release on Crowe's label, Rubenesque Records Ltd.) The digital album contains 13 exciting tunes and honestly potent performances. It’s a magnificent set of songs from Allison Crowe and her extraordinary band of musicians. This physical double-CD set - available here on eBay - comes with a bonus, live, disc – “Introducing”. Enjoy!! REVIEWS: "Heirs + Grievances is a gorgeous, full circle showcase of Allison’s growth as a singer-songwriter and multi-instrumentalist. Her extraordinary voice is unrestrained and beautifully accompanied by her bandmates." ~ Muruch (USA) “In the past, Crowe has devoted herself to trad folk, contemporary rock, Christmas songs and music of Leonard Cohen, all of which have merged into these two discs to create a portrait of an idealist — with the addition of her between-songs talk on the live recording revealing a bubbly personality.” ~ Tom Harrison, The Province (Canada) “I don’t believe Crowe ever sings a song without an absolute personal commitment... This is an album that should and could develop a greater audience for Crowe beyond those who already adore her.” ~ Some Diurnal Aural Awe (UK) http://music.allisoncrowe.com/album/heirs-grievances