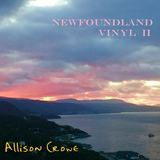 “It’s here! Allison Crowe just released Newfoundland Vinyl II and it’s the perfect followup to her traditional folk masterpiece, Newfoundland Vinyl,” says Muruch, the discerning culture blog. “Like its predecessor, Newfoundland Vinyl II is comprised of traditional Canadian, Irish and Scottish folk songs newly arranged, performed, produced and engineered by Allison Crowe.” On this album, Crowe’s amazing talent in service of songs roves o’er centuries-old carols to a modern canon of such stellar writers as Gary O’Driscoll, Ron Hynes, Al Pittman and Andy Vine – and tunes originally performed by such popular acts as Corey & Trina, Figgy Duff, & Buddy Wasisname and the Other Fellers. Allison Crowe’s voice, guitar, fiddle, mandolin, tin-whistle, percussion, arrangements, engineering, production and photography come together – with guest backing vocals by NL actor/teacher Adam Brake (on "Out from St. Leonard’s"). The album further celebrates a creative bond between Crowe, the internationally-loved touring and recording artist, and Theatre Newfoundland and Labrador, the professional theatre company founded on the island’s west coast in 1979. Each Summer from 2012 through 2015 Allison Crowe's served as Musical Director of "Newfoundland Vinyl" - a perennial favourite at the Gros Morne Theatre Festival. Theatre Newfoundland and Labrador's Artistic Director Jeff Pitcher, who conceived the hit stage show, remarks: "No matter where she is in this world, that voice, that conviction, it crosses all borders. She's one of those rare artists that fits into any culture, any community because she is who she is - an incredible talent." Heralding “Newfoundland Vinyl II”, the Celtic Music Fan blog says: “It is about singing from the heart. It is about singing the songs of people that have been passed from every generation.” Of her immersions as Musical Director with TNL, and the melodic bounty that’s landed, Allison Crowe notes: "There is so much wonderful music - you could piece together multiple anthologies and still only scratch the surface of such an extensive and rich collection. Each of these songs is its own story, of land and sea, of people, and each story in-and-of-itself could be an entire show. I’m truly grateful that you are here to hear the story these songs have to offer.” She gives special thanks to “the incredibly talented and versatile” casts and crews of TNL’s productions for their inspiration. REVIEWS - Allison Crowe’s “Newfoundland Vinyl” LP: “Simplicity, leisure and sensuality are all found in Newfoundland Vinyl II.There are also different instruments- both traditional and modern , appearing in each song... The enduring sentiments in all these songs make them powerful and no matter how you sing them – you sing the toils, pains,heartbreak and joy of souls across time.” ~ Baxter Labatos, Celtic Music Fan blog - full review @ celticmusicfan.wordpress.com/2014/12/17/two-new-albums-by-allison-crowe “The perfect followup to her traditional folk masterpiece” ~ Muruch culture blog- full review @ www.muruch.com/2014/12/allisoncrowe-vinyl2.html Allison Crowe - voice, guitar, fiddle, mandolin, tin-whistle, percussion, arranger, engineer, producer and photographer Adam Brake - backing vocals ("Out from St. Leonards'") http://music.allisoncrowe.com/album/newfoundland-vinyl-ii