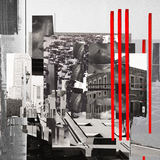 The latest new talent to emerge from the vital Yala! Records roster, Brighton quartet Egyptian Blue have sparked a buzz on the back of their debut EP ‘Collateral Damage’. Praised by Joe Talbot of IDLES and Yannis Philippakis of Foals, they’ve also earned a 6 Music playlist plus further airplay from Steve Lamacq, Jack Saunders, John Kennedy, Huw Stephens, and Tom Ravenscroft.

Streaming support included adds to the Indie List and the Apple A List Alternative. And along the way they’ve further developed their following with electrifying performances on tour with The Murder Capital and a storming set at All Points East. No wonder that the ‘Collateral Damage’ EP’s vinyl run is already long sold-out.

Now Egyptian Blue build on that growing acclaim by sharing their new single ‘Adderall’ ahead of extensive touring in the coming months. ‘Adderall’ was written on the same day as ‘Collateral’, but takes a different angle to their psychosis-fuelled post-punk sound. This time around it’s like the Birthday Party have been reanimated direct into the bleak future of modern Britain.

As with the rest of the EP, ‘Adderall’ is inspired by snapshots of conversations heard during a night out. As duel frontman Leith Ambrose notes, “The bitter end of the evening where people say something interesting. Or when someone says something that triggers negative thoughts in your head.”
Lifelong friends Andy Buss and Ambrose formed the band in their hometown of Colchester with bassist Luke Phelps. Initially located above a jewellery shop, they were the epitome of a band reacting to the mundanity of their surroundings. Early jams often devolved into marathon sessions of fourteen hours or more, made all the more chaotic by the amount of whisky they’d share as well as the growing attention of the local police.

Relocating to Brighton, a turning point came at a King Gizzard & The Lizard Wizard gig. Seeing a band that well-drilled made them rethink the work ethic that their own project required. The subsequent addition of Isaac Ide also inspired a darker, more intense direction for the band, together with a fresh rush of creativity.

Egyptian Blue’s touring schedule continues with a mixture of festivals and headline dates before they join Yala! alumni YAK on tour in November.