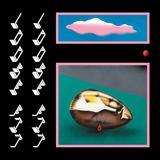 Today, Sydney AUS quartet Loose Fit are sharing their debut single "Pull The Lever." Taken from the forthcoming self-titled EP, set for release through FatCat Records on April 3, "Pull The Lever" wastes no time in marking the band's intent. A purposeful, broad-shouldered, looping bass motif is set front-and-centre against wiry guitar chuntering and scatter-gun percussion. Lead singer Anna Langdon marries charismatic, pitch-black vocals to lyrics that mix oblique imagery with emotionally powerful subject matter. It starkly paints life as an endless series of risky gambles, Langdon nonchalantly commanding, “Pull the lever, try your luck again, colours spinning, wind them up again, it’s time to start again.” Of the lyrics, Landon explains, "Apps on our phones are designed like slot machines. It's addictive and exciting to play a dating app. Refreshing or swiping is like pulling the lever of a slot machine to see what you got. That design is no accident in an attention economy.” On the the creation of the track, the band say, "Pull The Lever was probably the first song we wrote where we felt we had kinda cracked open the 'Loose Fit sound' and found out what it was. We were trying to toe the line between moodiness and danceability.” Loose Fit began when fashion school friends Kaylene Milner and Anna Langdon bonded over their mutual love of experimental music. After toying with lo-fi bedroom recordings, the pair recruited Max Edgar on guitar and Richard Martin on bass and started making some actual noise. With Kaylene behind the kit and Anna on sax and vocal duties, Loose Fit’s unique and focused sound began to take shape. The debut EP is a “moody critique of the absurd”, tackling themes of frustration, disillusion, fear, love, and rage. Since playing their first show in early 2019, the four-piece have been putting in time on stages around the east coast of Australia and have steadily been gathering fans and friends along the way. On stage and on record Loose Fit is an energetic unit propelled by a heavy rhythm section that isn’t afraid to assault unsuspecting punks with the ultimate taboo - groove. Loose Fit are: Anna Langdon (vocals) | Kaylene Milner (drums, sax, vocals) | Max Edgar (guitar) | Richard Martin (bass)