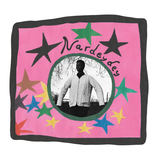 “The London-based musical polymath Shirley Tetteh is a wearer of many hats: guitarist, composer, jazz collective founder. As her latest incarnation Nardeydey, she has released a punch bowl brew of a song: a little italo disco here, a little post-punk there” – Pitchfork

“London’s Nardeydey has played guitar for Anderson .Paak and Little Simz…. she melds dub with post-punk in an explosion of alt-pop sound of melody.” – The FADER

“Shirley Tetteh, who was named Jazz Newcomer Of The Year at the 2018 Parliamentary Jazz Awards, is making her own inventive pop under the name Nardeydey. Tetteh’s guitar-playing is so distinctive it has a habit of defining whatever rhythm section she’s a part of” Jazzwise

The “Nardeydey” EP is the first vinyl release and body of work from Shirley Tetteh and her pop alter-ego Nardeydey. Today she reveals the full EP including brand new song “Slippin”

Speaking of the new track today, Shirley says; “"Slippin’ came from a conversation I had with my friend and percussionist, Tim Doyle, about being nice versus being honest. This followed us having a bit of a spat with a waiter whilst on tour in Brussels. I was trying to argue that it's ok to be angry and have since become reacquainted several times with the fact that I need to take my own advice! I wrote 'Slippin' with the message of not worrying about other people's approval, which is something I do a lot - “Physician, heal thyself” (Luke 4:23), I suppose."

Self-produced and all written by Shirley, her debut EP is an example of what has got so many people excited; that the new wave of British jazz might have just found a great new songwriting voice in its rank.

Previously heard tracks “Speedial” and “FreeFalling” were met with loving support across the print, digital and radio media. She has supported Kate Tempest on national tour and saw Nilüfer Yanya in support at her recent ‘First Fifty’ show for ‘The Great Escape’ Festival, where she will be much anticipated next year. On her debut EP she reveals “Dreamin” and “Slippin”. The new tracks combine atmosphere, off-beats, and soul with relatable personalised narrative, and are replete with sophisticated chord work and smart synth and rhythmic production details wrought by her production hand - “Slippin” is the sing-along harmonic anthem that the jazz scene has been holding on to dance for. Held as a whole, this is the freshest and most unusual pop song writing out there.