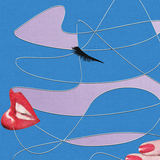 Public Practice have announced their debut full-length Gentle Grip, set for release on Wharf Cat on 15th May 2020. On the album, the Brooklyn four-piece re-animate the spirit of late ‘70s New York with their playfully angular brand of no wave-meets-funk and dark disco. While magnetic singer and lyricist Sam York and guitarist and principal sonic architect Vince McClelland (who both played together as members of the meteoric yet short-lived NYC post-punk outfit WALL) take an almost anarchic approach to songwriting, Drew Citron, on synth and bass, and drummer/producer Scott Rosenthal (both previous- ly of Brooklyn indie-pop favorites Beverly) bring a more traditional, pop sensibility to the table. These contrasting styles challenge and complement each other, resulting in a sound that is full of spiraling and exhilarating tensions. The first track to be shared from Gentle Grip is ‘Compromised’, of which frontwoman Sam York explains: "Compromised deals with the moral gymnastics that many of us struggle with daily just to be a human in this world. How do we balance our desire for material pleasures with our need to be seen as moral and good? What’s more important, the shoe or where it came from? How it was made or how it looks? I am no shining example and I struggle with this constantly. This song was recorded live to tape in our rehearsal studio in Brooklyn, NY." Following a string of US dates with the likes of Parquet Courts and A Place To Bury Strangers, Public Practice will be coming to the UK for a headline tour which includes a date with friends and fellow Brooklyn band Bambara. The play: Tour Dates 3/13 - Bowery Ballroom / New Colossus Fest, NYC, w/ A Place To Bury Strangers 3/14 - Berlin / DIY Magazine / New Colossus Fest, NYC, w/ LIFE and The Orielles 3/28 - Elsewhere, NYC, w/ The Automatic and Shopping 4/4 - White Eagle, Jersey City, w/ Parquet Courts 4/5 - Ardmor Music Hall, PA, w/ Parquet Courts 5/4 - Heartbreakers, Southampton, UK 5/5 - Electrowerks, London, UK 5/7 - Yes, Manchester, UK 5/8 - Brudenell Social Club, Leeds, UK w/ Bambara 5/9 - Nice N Sleazy, Glasgow, UK 5/10 - Sneaky Pete’s, Edinburgh, UK 5/12 - Hare & Hounds, Birmingham, UK 5/13 - Louisiana, Bristol, UK 5/14 - The Great Escape, Brighton, UK Essential New Artist For 2020 - NME Both [“Disposable” + “Extra-Ordinary”] exist at the intersection of punk and funk. – STEREOGUM Brilliantly danceable – DIY The opening seconds of Public Practice’s “Foundation” channel Talking Heads’ “Once in a Lifetime,” but the song quickly shifts to revisit another sound of the early ‘80s: arty new wave that’s sleek in some spots but jagged in others – NPR [100 Bands We Want to See at SXSW]