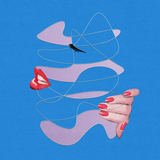 NYC’s Public Practice have revealed a new track off their forthcoming debut album Gentle Grip (Wharf Cat). “My Head” is released today and the accompanying video was shot by the band’s guitarist Vince McClelland and directed by their front person Sam York who notes, “The video shoot for "My Head" was Public Practice’s last social activity before we went into quarantine here in NYC -- the final dance! Josie and Jon, who edited the video, were the last two people I saw, passing off the hard drive with the footage and walking home listening to the news, not knowing I would be spending the next month and then some inside my apartment in social isolation. With lyrics ‘I don't want to waste my time / I don't want to fade away’ combined with the visual of the dancers, each isolated in their own little world, the song and video feel strikingly relevant for these strange times. This video was created on the eve of isolation, edited entirely in isolation and is now coming to you while many of us are still stuck at home, but hopefully now we're all dancing.” Watch “My Head” here:

Gentle Grip will be released digitally on May 15, with the physical release now coming June 26. Pre-order the album here. The band have to date shared the singles “Compromised” and “Disposable.” Since their inception Public Practice have built a reputation for their invigorating live performances. York’s stage presence casts a spell like a young Debbie Harry, or Gudrun Gut circa Malaria! The band are excited to return to the stage -- they will be supporting Parquet Courts in the US on July 13 in Jersey City and on July 14 in Philadelphia. They will head over to the UK in September for a headline tour - all dates are listed below.

"On “Compromised’ the spiraling guitar riffs remain, as does the clipped and crisp drumming, but there's a B52’s inspired beehive pop haze surrounding the self-reflection" – NPR

Public Practice revive the spirit of late ‘70s New York with their intoxicating brand of no wave-tinged dark disco. The band (who Paste recently named as “one of the 15 New York City bands you need to know right now”), came in hot with their punchy balance of punk, funk, and pop on the critically acclaimed Distance is a Mirror EP in 2018.

Together, the foursome strikes a nimble balance between sharp punk, avant-garde flourishes, and traditional pop structures, creating bold, slinky rhythms and groove-filled hooks that get under your skin and into your dancing shoes. The musicians’ unique chemistry and approach to songwriting is part of what makes their world so intriguing. Magnetic singer and lyricist Sam York and guitarist and principal sonic architect Vince McClelland, who were creative music partners for years prior to Public Practice’s formation, come to the table with an anarchic perspective that intentionally challenges the very idea of what a song can be. Meanwhile Drew Citron, on bass/vocals/synth, and drummer/producer Scott Rosenthal are influenced by a more classic pop sensibility. Instead of clashing, these contrasting styles challenge and complement one another, resulting in an album full of spiraling tensions.

York - who pens virtually of the lyrics - explores ideas about navigating the act of creating, relationships, and capitalism. Gentle Grip is a record, ultimately, about the truth of self.
Public Practice have a knack not only for curious, catchy song writing but also for old school New York drama, and a sound and presence that’s classic and fresh all at once.