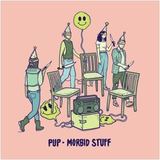 Toronto, Ontario’s very own punk powerhouse, PUP, are proud to announce their new album, Morbid Stuff, set for release on the band’s brand new label Little Dipper, in partnership with Rise Records/BMG on April 5th. Produced, recorded and mixed by Dave Schiffman (Weezer, Cass McCombs, The Mars Volta), Morbid Stuff is everything that PUP fans have grown to love about them, but dialled up to 11. It’s gang’s-all-here vocals, guitarmonies, and lyrics about death. Lots of them. The album’s visceral, wildfire first single, 'Kids,' can be heard HERE. “'Kids’ is a love song from one nihilistic depressive to another,” explains Stefan Babcock. “It's about what happens when you stumble across the only other person on the face of this godless, desolate planet that thinks everything is as twisted and as fucked up as you do. And thanks to them, the world starts to seem just a little less bleak. But only slightly - it's still pretty fucked up to be honest.” This April, PUP will embark on a UK and Europe tour in support of Morbid Stuff. Pre-sale tickets will be available tomorrow, 16th Jan at 12:00 PM local time at www.puptheband.com, and $1 of every ticket sold through the pre-sale will go towards The Trevor Project, a leading organisation providing crisis intervention and suicide prevention services to LGBTQ youth. Sign up NOW through 11:30 AM local time tomorrow at the band’s website to receive the pre-sale password. General tickets are on sale 18th Jan at 10:00 AM local time. All tour dates can be found below. In addition to album pre-orders, which are available now HERE, you can also pre-order “The PUP Morbid Stuff Annihilation Preparedness Kit,” which includes a CD or limited edition coloured LP, a long sleeve shirt, a backpack with sewn-on patch, custom band aids, a waterproof container, and a multi-tool with fork, spoon, etc. A very limited edition version of the Annihilation Preparedness Kit also comes with a real full-sized inflatable boat. Formed in Toronto five years ago, PUP, comprised of Babcock, Nestor Chumak, Zack Mykula, and Steve Sladkowski, quickly became favourites of the punk scene with their first two, critically-beloved albums, winning accolades everywhere from the New York Times to Pitchfork, from NPR and Rolling Stone, and more. Their last album, The Dream Is Over, not only debuted at #1 on the Billboard “Heatseekers” chart, but also catapulted them into international waters, selling out shows across the world throughout 2016. With Morbid Stuff, PUP grew up, then doubled down on everything that made you love their first two albums. Fitting to their ethos, their new album takes the dichotomy of fun and emotional wreckage in their songs and blows it up, projection-style, onto the biggest wall possible, teetering between gleeful chaos and bleak oblivion while wielding some of the best choruses the band has ever written. It’s also a pretty intense foray into the mind of singer Stefan Babcock, an album dressed up with heartbreak, broken dreams, self-loathing, and castigating yourself for thinking you matter enough to even bother hating yourself. And in perfect PUP fashion, taking responsibility of his own struggles lead him to….laughter. Admitting to his troubles allowed him to laugh in its face, and the result is that marriage of darkness and joy that made PUP who they are, but in a brand new way. Indeed, despite its dark subject matter, at times Morbid Stuff is funny as hell, even in the music. Often times a heavy barrage of hardcore is coupled with a light, folky guitar that lives quietly in the background. Rollicking choruses disappear into nothing but a hopeful group chant, echoing through until the end of the song. PUP’s rage isn’t pure rage anymore; it’s rage being taunted by the reality that the rage is its own fault. It's all the fury and celebration you've come to know, but rooted in understanding of where that fury comes from. It’s the most insightful, sweetest, funniest, sickest, angriest, saddest and most inescapably desperate collection of songs they’ve recorded to date. If their self-titled debut record was the fuse and The Dream Is Over was the bomb going off, Morbid Stuff is your family sifting through the rubble, only to find you giggling in the wake.