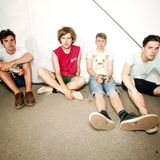 In July, China Rats were booked to play the tiny Villa Camp stage at Spanish festival BENICASSIM the night before the main festival started. The result was an impromptu mosh pit and a festival booker who wished he had booked them for the main festival. Except the following day, Bat For Lashes, who were booked to headline the 2nd Stage, couldn't make it onto the site and the festival booker had his chance. China Rats stepped up to the plate, bigger much pits ensued; it is the stuff of Rock n Roll folklore and a night they will never forget.

China Rats formed in Leeds in the Summer of 2011. They released their debut EP 'To Be Like I' in April this year and quickly earned the attention of BBC Radio 1's Huw Stephens and European radio support from Amazing Radio, Absolute, Q and BBC 6 Music in the UK, 3FM in Holland, FM4 in Austria, RN3 in Spain, P3 in Sweden, YLEX in Finland amongst others.

'(At Least Those) Kids Are Getting Fed' is the follow up single released on the 8th of October.

And so with still only a few gigs under their belts, China Rats set out on a UK tour and return to Europe for a series of shows:

More dates to be announced soon...