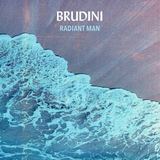 “Radiant Man is the story of a person fighting against a tidal wave. In the midst of a crisis, I find there is something about the enduring human spirit that emerges and brings us closer. Radiant Man is an homage to this human radiance.”
Brudini

Having become a fan favourite at his live shows, Brudini’s new single Radiant Man unfolds like a Greek tragedy. A protagonist with good intentions, fighting on, crushed against a tidal wave of forces beyond his control.

Recorded in a basement studio in Stoke Newington without any use of a click-track and on analogue instruments only, Radiant Man has a timeless, soothing feel, and features jazz drummer Derin Bayhan (Istanbul) and Casper Hoedemaekers (Netherlands) on double bass. It was mixed and mastered at legendary NYC analogue boutique studio Sear Sound (John Lennon, Lou Reed, Ryan Adams ++) by Grammy-winning engineer Jeremy Loucas and Brudini.

Radiant Man is the 4th single from forthcoming debut album From Darkness, Light which is finally due for release on May 15th. It follows the critically acclaimed singles Reflections (which is currently is getting solid support on BBC6), Emotional Outlaw and Pale Gold.

After hanging up his gloves from a career in finance and as co-owner of The Society Club in London, Norwegian born Erik Brudvik’s debut album as Brudini speaks of a life spent journeying and of a man who has traversed seemingly contradictory worlds before finding his creative voice.

Coined by Louder Than War as “an indescribable talent”, Brudini has drawn praise from NYC punk legend Danny Fields (Iggy Pop, Jim Morrison, The Ramones) and received continued radio support from BBC6, RadioX, and been featured on Radio 2’s Frank Skinner. His live performances include collaborations with Lulu Gainsbourg, appearances at Tate Britain and a sold-out Soho alt-cabaret with LGBTQ-pioneer Lanah P and Erasure´s Andy Bell.

Soul searching and profound, Brudini’s conceptual LP debut From Darkness, Light weaves an abstract, wandering tale through feelings of loss and longing, anger, lust and despair, towards cosmic consolation. The beatific qualities of his songwriting and lyrics fuse seamlessly with poems by Californian writer Chip Martin, at two generations his senior. The narrative comes alive through a visceral soundscape of creaky pianos, analogue synths, syncopated jazz rhythms and the occasional jarring distorted guitar.

Self-recorded and self-produced, Brudini’s debut is an invitation to slow listening, providing a bare and unusual perspective of the blood and guts of a grown-age transition.