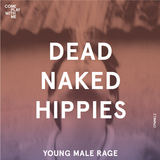 Whilst making an assertive step forward in the band’s sound and dynamic, ‘Young Male Rage’ once again echoes the band’s penchant for insightful lyricism - this time, front woman and lyricist, Lucy Jowett, turns at- tention to gender norms and conditioning. Speaking about the track, Jowett says: "This is about gender norms - the conditioning we subject our children to from a young age in the values we instill and in particular the idea of male dominance and the toxic effect it can have. Earlier this year this topic was constantly cropping up between us, and ‘Young Male Rage’ was the result of these conversations - from the perspective of a mixed gender band. We wanted to flip this on its head and project it from the female voice.”

Dead Naked Hippies, comprising of Jowett, guitarist Joe Clarke and drummer, Jacob Marston, emerged back in 2016 with a post-punk/alt-rock sound likened to the Smashing Pumpkins, Blood Red Shoes and Savages. Since their inception, the band have received support from 6 Music, BBC Introducing, KCRW, Amazing Radio, PRS and the Metro, as well as earning spots at Leeds and Reading Festival and sharing stages with the likes of IDLES, Dream Wife and Honeyblood.