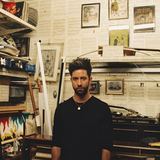 Bruno has amassed over 70 MILLION streams and has appeared on The Late Late Show with James Corden- watch here:
https://www.cbs.com/shows/late-late-show/video/Ek0_CByyqhpx65MQr08_hNVyCX5foq79/bruno-major-easily/

The lead UK track is “Easily” but this is a developing artist, so here are 4 tracks I think sum him up and are all moving him forward, especially the track I love “Home”.

In 2017, Bruno Major wrote and released a new song every month. The project, ‘A Song For Every Moon’, came to a conclusion in August, creating a stunning collection of twelve songs which has now amassed over 70M streams.

Bruno is currently on a sold out debut tour of North America.

What The Press Say
• “The 12-track A Song For Every Moon is a small-hours acoustic gem, showcasing beautifully his serpentine guitar-playing, crooning, careworn vocals and pinpoint ability to nail an emotional truth.” – Sunday Times Culture
• “Bruno Major is building momentum with his soulful pop sound... timeless songwriting and intimate lyricism.” – Pigeons and Planes
• “The tracks are powerful by themselves, sobering, dusky musings powered largely by scraps of haunting piano and Major’s tremendous vocals.” – Clash
• “Writing emotive and powerful songs, his voice is guaranteed to send shivers down your spine with it’s originality and intimacy.” – Wonderland Magazine

One of the many endearing things about Bruno Major is that he doesn’t seem to have any idea – really, not a single clue – what a powerful and emotionally searing singer he is. Ask Bruno about his guitar-playing and, sheepish grin out of the way, he’ll wax lyrical about an instrument he first picked up at the age of seven, and which has seen him through good times and bad, triumphs and false starts, ever since. It comes as no surprise whatsoever to learn that Bruno studied and mastered jazz guitar (studies that saw him earning a living as a session guitarist from the young age of 16). The “extra chord” that is such a hallmark of the jazz greats – and eludes so many guitarists unversed in the musical language of the genre – is a constant in Bruno’s writing, and a quality that sets him far apart from that endless stable of like-minded peers.

You can hear it in the opening bars of Easily, one of a series of tracks Bruno has released over the past nine months. Just as the melody of the verse seems set to resolve itself, a detour occurs as he is ensnared by the beauty of another unorthodox chord.

It has been a prolific nine months, recording, mixing and releasing music from his North West London flat. To release songs in such quick succession is not a tactic as such, rather a cathartic release that Bruno craves.

A late-starter on the singing front, Bruno wasn’t exactly first out of the traps as a songwriter, either – another surprise, when you consider how fully-formed and natural his writing sounds. “I think a combination of a lot of different things had stopped me writing before. The main thing I needed to understand that I had the ability to write; I had no idea. I’d never sung before, I wrote poetry, and I wrote music in my head. It takes a certain amount of courage to put your personal thoughts into a musical format and put them out into the world. Writing my first song felt like an epiphany, and the floodgates opened and that was that.”

He finds it hard now, he says, to imagine a time when he didn’t write. “I’d been a guitarist for so many years, and I knew that music was the thing that was most important to me, but I didn’t know quite what it was within music that I needed to do. I’d been a session player, I’d studied jazz and done classical music, it was all there, but I hadn’t worked out what was missing.

It was suddenly so obvious; a real on-off switch moment, when he wrote his first song. “I felt like a much more complete person, more at peace, about everything.”

“I admire people who can write amazing songs at the age of 18, but I don’t know what I would have written about. I hadn’t discovered anything about the world. It took a few years of doing that, of living life, before I could begin to process that and spit it out.”

It’s the duelling tension in Bruno’s song writing that creates such engaging moments. In the lifts of soaring ballad Home or the struggling ode of Easily - it’s contemporary ballade ring that touches something very familiar in the listener.

Bruno may still fight with his identity as a performer, but long may the battle between his two natural gifts continue. Because tension has rarely sounded this sweet.

I hope you feel this is a special and something very exciting for 2018.