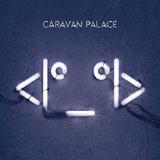 Caravan Palace will release , their third studio album, on October 16th 2015. Created in their Parisian studios, where the electro-pioneers fuse hedonistic house and old school jazz to glorious effect, evokes the spirit of a modernistic Quintette du Hot Club de France. ‘Comics’, a masterpiece of hip-hop synth-jazz and the first taster from the new album, was revealed in June with a mesmerising video (watch HERE).

The band’s appeal has grown off-radar, appreciated for both their musical virtuosity and their sheer ability to deliver a ballistic good time and, following a run of festival dates including Secret Garden Party, Wilderness and Boomtown, Caravan Palace will return to the UK this December for a headline tour.

Having originally formed in 2005 the band’s eponymous debut album in 2008 set the tone - a rip-roaring party, bursting with fun and good humour. From it, the single ‘Jolie Coquine’ went on to define a new sound, while the parent album launched the band globally, charting in their native France where it quickly attained a platinum sales award.

The second album, 2012’s ‘Panic’, was a little more experimental. Featuring the massive tunes ‘Clash’ and ‘Rock It For Me’ it remains a treat to listen to, whether in a burlesque bar or at home. Since its release the band’s live profile has risen unrelentingly, their concert tickets flying out with minimum promotion and zero-hype. A true word-of-mouth sensation, they’re capable of tearing the roof off any venue or festival tent.