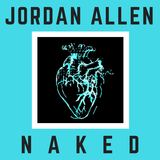 JORDAN ALLEN IS BACK WITH ‘NAKED’ AFTER HUGELY RADIO SUPPORTED SINGLE ‘SYNCHRONISED’ EARLIER THIS YEAR!

With eyes locked on the dance floor, JORDAN ALLEN, are back to raid your local indie disco with their simmering latest single: ‘Naked’.

With sultry shades of Pulp, Friendly Fires and Foals, ‘Naked’ is a hip-swinging and anthemic new addition to the Bolton band’s catalogue. Fitted-out with a chest beating chorus, a cocksure guitar strut and even a 90s Ibiza-inspired break down (yes really!), ‘Naked’ is engineered to have you let- go your inhibitions and arrives as the band’s most sonically diverse and biggest sounding release to date.

Beyond the brave new stylings and its cheeky title (an in-joke of the band, its original working title was ‘Without Any Clothes’ it would seem), there is of course Jordan’s unique turn of phrase and compelling bare-all lyrics that make stand him out from the pack. Speaking about the track’s

“‘Naked’ is about how trying to change the way you live your life to suit someone else doesn't not work, not matter how much it feels like they are the right person for you. If you can't be yourself with someone, they will never truly get to know you, no matter how much you enjoy each other’s company or how you think you can or should change to make them think better of you. Towards the end of the track the lyrics ‘you can't believe it, it's going cold, why can't you see that we're juxtaposed" hammer home that this isn't always something the other person will understand or handle particularly well.”’

The single arrives with apt cover art of an exposed heart as designed by emerging artist and friend of the band David Considine.

Much like their adventurous and most radio-played single to date, ‘Synchronised’, which received airplay across Radio X, BBC Introducing, XS Manchester and beyond, ‘Naked’ shows that Jordan Allen are anything but a one trick pony. As Jordan adds:

“We don't want to be a band that releases the same song over and over again. Every track has to have a unique style and feel, we want to be a band from which you can expect the unexpected while still capturing the energy we're renowned for when we play live.”

Bristling with ideas and clearly hungry to show the world what they’re made of, the band will be taking their bold new material out to be consumed on the global stage as they line up their first international shows next month at Canadian Indie Week.

With their live show well-honed after some dates in front of big audiences on tour with The Bluetones and The Sherlocks this Autumn, the band will be giving it 110% in Toronto before returning home for their own headline UK live dates throughout November and December. See Full dates and details below.

As their promising future continues to unfold, so far the band have hurtled through sets at major festivals such as Isle of Wight, Truck Festival, Kendal Calling, Y-Not and Isle Of Wight; had a blast on the road with touring buddies The Sherlocks including an incredible performance to a 2500 capacity crowd at Manchester Academy; bothered the airwaves once more with the unleashing of rowdy fan-favourites ‘Synchronised’, ’R.O.S.I.E’ (as produced by David Rahad-Jones) and ‘110
Ways to Make Things Better’ which both tallied up plays on BBC Introducing, BBC Radio 6Music, and Radio X-Posure Playlist as well as being made Mark Richardson’s Record Of The Week on Virgin Radio ; bowled fans new and old over with a 16 date sell-out UK winter headline tour; plus, to cap it off the band were even granted the honour of illuminating the Bolton Christmas Lights.
Propagators of intelligent rock’n’roll with true heart, Jordan Allen are a band you can believe in.