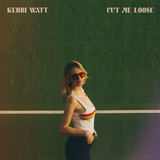 ‘Cut Me Loose’ is the powerful, playful new single from Kerri Watt, her first release since her recent signing to Cooking Vinyl. Recorded in Austin, Texas, with Grammy-nominated producer Machine (Fall Out Boy, Lamb Of God), ‘Cut Me Loose’ heralds an edgier new direction for the Glaswegian singer-songwriter, whose previous country-pop singles have been playlisted on Radio 2. You’ll still hear the influence of her long term loves – Sheryl Crow and Van Morrison among them – but Kerri’s new sound has been inspired by the Americana and blues-rock bands she studied to teach herself guitar.

“Cut me Loose is about breaking free from someone who’s had a hold on you, leaving all the drama behind and never looking back,” says Kerri. “The mood is bold, empowering, a little dark and sexy with a dramatic energy. I was inspired by artists like Barnes Courtney, Kaleo, The Black Keys and Ballroom Thieves when writing the track.”

‘Cut Me Loose’ will be accompanied by a brilliant video inspired by ‘I, Tonya’, one of Kerri’s favourite recent films. Not only does she ice-skate, she also styled the video, which will be premiered in the near future.

Earlier this year, Kerri supported Keith Urban in London, joining him on stage to sing Carrie Underwood’s vocal parts from 2016’s hit single ‘The Fighter’. She has performed at this years Country2Country and Glastonbury Festivals and last weekend she appeared at British Summer Time in Hyde Park ahead of Celine Dion. Kerri will be supporting Rick Astley at Kew The Music on July 14, and appearing at Cambridge Folk Festival on August 2.

The eldest of three children, Kerri was brought up in the suburbs of Glasgow by a dad who played for Celtic before becoming a football manager, and a mum who ferried her to endless music, dance and drama classes. At 15, having made friends in California on summer holidays there, Kerri won a scholarship a music college in Orange County and persuaded her parents to let her relocate for a year. She has lived on and off in California ever since, and you can hear the influence of the Golden State in the widescreen sound and lyrically empowered ‘Cut Me Loose’.


Kerri’s 2015 self-released debut single ‘Long Way Home’, produced by Embrace’s Richard McNamara, was playlisted by Radio 2, and for the next two years, she toured incessantly around the UK and Europe, including supports for Ward Thomas, Nina Nesbitt and Mike & The Mechanics. Kerri scored another radio hit with 2016’s ‘The Wild’ and a dance remix of her song ‘You’ reached No.1 on Hype Machine, amassing millions of streams. In 2017, Kerri found herself on stage at Cardiff’s Millennium Stadium alongside Embrace opening for Coldplay on consecutive nights. Last year, Kerri took some time out to write, spending several months in the US and amassing 35 new songs.