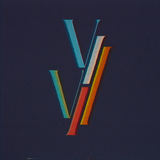 Featuring critically praised singles ‘Love Love Love’, ‘And Tragic’, ‘Suckerpunch’, ’Savant’, ‘Siv (You and I)’ and on April 26th the new single ’Fibromyalgia'. It’s a glorious introduction to this incredibly exciting rising act. Stunning soundscapes abound, its richness wraps you up in a dreamy haze.

All the previous five of ViVii’s singles have reached the top 5 on Hype Machine chart, with ‘And Tragic’ and ‘Suckerpunch’ reaching the #1 spot. Radio support has come internationally from Guy Garvey (Elbow) on his 6Music show (UK), P3 (Sweden), NRKP3 (Norway) 3FM (Holland) and Radio Eins (Germany).

Online tastemaker support has come by way of The Line of Best Fit, DIY Mag, Indie Shuffle, CLASH, Earmilk, Hilly Dilly, All Things Go (Best Songs of the Week), Crack in The Road, Record of the Day amongst many others. They’ve clocked up 6 million streams on Spotify alone. They also recorded and released a COVER of Harry Styles ‘Sign Of The Times’ for the Mahogany Sessions.

US tour confirmed
Having made their New York live debut at the Sweden Makes Music showcase in December and more recently performances at Reeperbahn Festival, Eurosonic, By:Larm, Paradiso in Amsterdam, a string of dates in Sweden and London’s Hoxton Bar & Kitchen, the Swedish trio are confirmed for this year's Life Is Beautiful Festival in Las Vegas and a 9 date US tour in late September to early October. Full run down of live dates below.

* US booking by Paradigm


The trio is made up of Emil and Caroline Jonsson and their enigmatic work partner Anders Eckeborn. Speaking about their relationship Emil explains, “We work with another guy, but he doesn't like the limelight at all...” “Anders is amazing, he loves all noises,” continues Caroline. “It took ages, we were so slow before, but once we met Anders it became easy – we are all slow workers individually but together it's beautiful. It's always so natural.”

Caroline and Emil, who were born and raised in the coastal city of Gothenburg, met at summer camp as children and formed a strong, life-long bond that pulses powerfully decades later. Friendship swiftly blossomed into romance and by their late teens they were a couple; by their early twenties they were married. The childhood sweethearts then embarked on a dream honeymoon to New York City, staying so long they had to traverse the Atlantic multiple times to renew visas. Eventually, funds dwindled and they had to find work, with Emil reviving his teenage modeling career to supplement their vacation of a lifetime – but that's far from the end of the hurricane tale.

A chance encounter at an Eric Roberson gig – part of their trip's purpose was to absorb as much music as they could – led to a wild journey with soul sensation Tye Tribbett. An instant connection erupted between the trio (“he had a crazy energy,” says Emil), and they spent a few heady months touring the East Coast as part of his gospel choir and immersing themselves in a completely different lifestyle than they were used to, fulfilling one of Caroline's lifetime goals in the process. But still, they weren't done.

Emil and Caroline lived a full, enviable life before deciding to relocate to Stockholm and focus on themselves. Life, of course, had different plans, and soon they were blessed with children; and this is where ViVii begins life in earnest. Perhaps surprisingly, young children didn't derail musical ambitions – quite the opposite. “When the kids came we got to actually write and record,” explains Emil. “When they arrived the structure came into our lives. We knew we had to do it then.”

So the duo got down to business on their own sounds, fusing tones and melodies and taking inspiration from the music of their youth: the old tunes crackling on grandparents' vinyl records, hymns from church, indie-pop jewels, classical opuses (“Bach, of course,”) and gospel choirs. Still, something was missing…With Anders thrown into the mix, ViVii galloped into life: “he slowly but surely grew into our producer and a third member of ViVii.

It's taken ViVii decades to reach this point – a fairytale ending with glorious music to show for it. Everything has led them to a dizzy high; but this is no true end to anything – this is just the beginning.