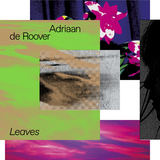 A collage of sounds that bloom and fade, ‘Leaves’ lures you into eleven little sound universes. Themes run from the proliferation of screens in the evolving opener ‘Blue Light’, to the lack of climate action on the urgent ‘Tomorrow Maybe’, and meditations about loss on ‘Liquid / no more’. Tracks such as the brooding pessimism of ‘T'as Faim’ are tempered by lighter moments, like Adriaan’s dedication to his niece ‘Helena’ and the trombone interlude ‘Forgot How to Breathe’. The album finds beauty in small gestures, an infinite balancing act between peace and restlessness.

Looking for a more simple, tranquil and focused way of life, Adriaan retired to a cottage in the Belgian Ardennes to work on the album. He explains:

“‘Leaves’ was written between 2016 and 2018, mainly in a cabanage in the Ardennes, in solitude and around nature. Although there are some outward moments, I tried to make music that finds as much beauty in small gestures, in doubt and in honesty (above all). I hope you can get lost in it, just like I did, and maybe then, some moments of beauty might reveal themselves.”

Adriaan has previously released three EPs with PIAS under the moniker Oaktree, which were supported by Bonobo, Mary Anne Hobbs and Lefto. Clash called him as “a unique talent” while NYLON described the EP’s “haunting yet mesmerizing sounds”.