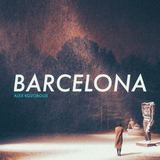 As encapsulated by the album’s artwork, ‘Somewhere Else’ is conceived as a collage of memories, locations, and timbres; comprised of pieces tied together by a wider rumination on place, distance, and perspective. From reflections on childhood memories to elegies for lost friends, every track carries an evocative title and presents an attempt to distill one or more past experiences in miniature by capturing fragmentary snapshots of moments, characters, and life-phases. The record as a whole stands out as a deeply reflective work – a musical approach to autobiographical writing.

‘Somewhere Else’ is an album with the piano at its heart. Alex describes the piano as possessing a therapeutic magnetism for him, having originally turned to the instrument as a way of regulating the symptoms of his Tourette syndrome. A jazz-like preoccupation with improvisation is embedded within the album, each track was brought to the studio slightly incomplete allowing for spontaneity during the recording process. Recorded over a handful of sessions by Ed Hamilton (Dead Light) at his studio in the Cotswolds, the very fabric of the piano – wood, felt, and metal – resonates throughout the album. The raw intimacy of the recording treads a line between stark and warm, between light and dark, giving full voice to the textured sound palette of the instrument.

Listeners will hear echoes of an array of styles. Regarding Nils Frahm’s album ‘Felt’ (2011) as a point of departure, Alex infuses the minimalist tendencies of recent ‘post-classical’ music with jazz harmony and intricate pianism. Moments within the record invoke the work of composers as diverse as Claude Debussy, Thelonious Monk, and Ryuichi Sakamoto.

Negotiating a boundary between the pre-composed and the improvisatory, ‘Somewhere Else’ aims “to raise questions rather than to give answers”, creating a space in which listeners may explore their own memories through music.