TUNE Being There - Generator 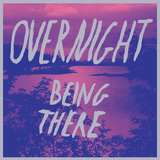 Being There is Sam Lewis and assorted friends. Formed in London in 2011, they released their debut album, 'Breaking Away' in 2012, produced by Richard Formby (Wild Beasts, Darkstar). An ode to Guided By Voices, Yo La Tengo and the power-pop of Lewis's youth, it was hailed by Drowned in Sound as an "indiepop gem". Over the next two years Being There went on to play shows with Los Campesinos, Francois and the Atlas Mountains, Tennis, Porcelain Raft, My Sad Captains and also supported Noah and the Whale on a UK tour.

Being There are back with a new EP, and a slightly modified sound. 'Overnight' is more rooted in the present than previous releases - a reflection on the moment rather than a homage to the past. Recorded by Ash Gardner (Summer Camp, Clark) and featuring backing vocals from Rozi Plain (Fence Records, Lost Map Records) and keyboards from Anya Pearson (Leisure), Overnight is full of ringing, lo-fi synth hooks and hopeful meditations on love lost and found in two years of touring and travelling from city to city across Europe.

'Generator' tracks the attempt to find a sense of home and belonging, long nights out in the city ("close your eyes / dissipate in the night") placed against a landscape where the city and its artefacts are something you can commune with ("leaf, take me home"). In this, Lewis was inspired by poet Frank O'Hara's ability to anthropomorphise the natural world, as well as author W.G. Sebald's city wandering. In the video for 'Generator' director Matthew Reed (Cymbals Eat Guitars / CYMBALS) has Lewis play a street preacher, lost and dazed in central London, trying to find his own sense of belonging.

Lewis cites contemporary groups such as Wild Nothing, Twin Sister and Destroyer as inspiration, as well as deeper influences like Arthur Russell and Tom Tom Club. He's currently working on writing Being There's second album.