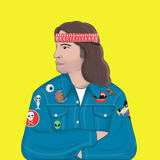 The EP is headed by the “Michael McDonald meets-an-MPC” ‘Which Way’, a 21st century blue-eyed soul toe tapper with a dash of psychedelic wonk.

“I was playing the guitar a lot when I wrote ‘Which Way’. The bird noises you might hear is from when I recorded the hand claps and finger clicks in the park. The song is about being a little lost and finding your way - I imagined long journeys with wild landscapes, sunsets across open land, maybe a few strangers on the horizon.”

The EP’s body is glued together with the dusty jam ‘Tango’, campfire anti-ballad ‘Burning Bright’ and delightfully meandering jazz-hop on ‘Slowly Crawl’. The title track closes the EP, calling back to ‘Which Way’s theme of feeling lost.

“When I wrote ‘Strange Folk’ I had spent a day in a strange city and had come home to this drum loop. The guitar part was super lazy and seemed to just fall out while I sang about my day walking around a metropolis bumping into odd folk. When you shut yourself off from the bustle of a day and take in what’s going on around with the soundtrack, it’s almost a hallucinogenic experience.”

Created almost entirely by himself, he gets by with a little help from friends: Leo Wyatt (KINDER) and Ben Rowley sent bass lines over the Internet and Charlie Carroll recorded saxophone in a large kitchen to get a moody, shimmering brass sound.

“I really wanted to pull back and try to make a record on my own, which meant I could work on tracks whenever I wanted and didn't need to schedule recording with other musicians. I was able to make music when the inspiration came. I would sit down in the early evening with just my laptop, MPC, headphones, tape deck and a notepad.”

Having traded as “Hairy Hands” on his debut album ‘Magic’ (released Tape Club/New Los, Sept 2016), James has taken off his metaphorical mask to create under his own name. His new songs draw back the curtain of escapism and begin to encompass the real world into his distinctive vocals. Sometimes oblique, sometimes explicit; the songs’ lyrics permit the listener licence to draw their own interpretations as to their meaning.

After periods in Devon and London, James now resides in the Hampshire countryside. Aside from his own releases, he’s featured on records by Slugabed (Anticon) and Morgan Hislop (Activia Benz) and played guitar on Tropics’ album ‘Rapture’ on Innovative Leisure.