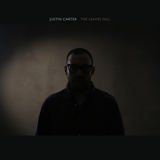 A delicate collection of songs for losing yourself, a meditation on spiritual struggle, a window into the parallel reality of Justin Carter: ‘The Leaves Fall’ is all of those things. Centered on his intimate vocals, with hints of Arthur Russell and John Martyn, the eight tracks are buttressed by warm acoustic guitars, vibraphones and organs and flourished with modern production. They are familiar but distant, ghosts living in the present.

Carter grew up in a country house in rural North Carolina. There was a pecan tree and a set of abandoned train tracks in the front yard. On long rides from home to his dad’s work as a school teacher, Justin’s ears were filled with the prog of Yes, the vocals of Al Jarreau and the intricacy of Christopher Parkening’s Bach recordings. It was his father, who has himself moonlighted as a guitar player and songwriter for nearly fifty years, that taught Carter to sing and play in his early teens.

‘The Leaves Fall’ was written on and off over the course of about five years, a secret to most. Carter is more familiar, alongside Eamon Harkin, as co-founder of popular New York parties Mister Saturday Night and Mister Sunday, and their record label, Mister Saturday Night Records. As the Mister thrived, his songwriting continued to tick along in the background, days and weeks stolen here and there to write and record in various locations – from a remote studio in the Catskills to a basement in Venice Beach.

The album features Jason Lindner, pianist on Bowie's final masterpiece, ‘Blackstar’; cello from Archie Pelago's Greg Heffernan; and programming by LIES Records and The Trilogy Tapes producer Marcos Cabral. It was mixed by Benjamin Tierney, who also worked his magic on Kamasi Washington's ‘The Epic’.

‘The Leaves Fall’ finds its context in the world of Planetarium, a new event series established by Carter and his Mister Saturday Night DJ partner, Eamon Harkin. Planetarium is an immersive, communal listening experience with live music sprinkled amongst hours of records. The event is focused on quality hi-fi sound in non-traditional spaces. Carter’s performances in support of ‘The Leaves Fall’ will be presented in the Planetarium format as opposed to traditional live shows.

“Nothing makes me happier than to see people letting go. My ambition in all my creative work is to make moments where that can happen. As a DJ, I use others’ music to create those moments, but it’s always been in me to make my own music for that purpose. After twenty-five years of writing music for myself, it makes me really happy to have something to share with others.”
- Justin Carter