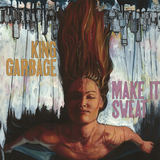 Zach Cooper and Vic DiMotsis return as King Garbage with their debut album, Make It Sweat. Following their 2013 debut on our Bangers & Ash 12” series (BASH003) and solo releases in 2016 - Cooper’s reflective, harrowing The Sentence (SUS011) and DiMotsis’ blistering, soulful beat tape, Mine Eyes Dazzle (SUS017) - the duo double down on soul and funk traditions to share new ways of communicating soul across eight rippers to the dome.

Make It Sweat follows the sunny and smoked rhythm and blues mode of BASH003 with a greater glow (mix care of Rachel Alina, Styles’ ace in the hole, get to know) and peerless compositional prowess. Check the wandering, hallucinatory desert dirge “Devil”, the Sufjan peaks and troughs of a castaway’s song, “Sharks”, or the lover's inebriated lament for one last jam before heading home, “Lost In The Sauce”.

Imagining the rhythm sections of Pino Palladino and Questlove amongst the vocals of Beth Gibbons or Sam Cooke will put you in the right headspace for King Garbage. Vic and Zach melt influence and experience with sheer joy, good humor and hearts full of friendship, burnishing gems of dusted pop. Vic’s vocals interplay with Zach’s guitars like a spell on “Merry Go Round”, their respective contributions bending under and over each other in endearing coordination. “Forbidden Lovers”, an ode to a friend who stays home with records instead of DJing out, ups the funky ante to the record’s catchiest heights. The flexibility on display is maddening - from croon to four-top harmonization, from breaks full of grit to heavenly horn sections, Vic and Zach push themselves into new territory with each track, grinning and improvising their way from one corner of the country to the next.

Make It Sweat refers to Vic and Zach’s personal manifesto to “smile in the face of looming obstacles,” to embrace the point of no return. A turn of phrase called out by either friend to encourage the other to play up, crank it, and go big - words of encouragement when the pressure is on and the spotlight shines its hottest. The title might taste of vice, but the sentiment couldn’t be further placed. After twelve years of friendship and collaboration, the duo have learned to lean on each other and encourage forward motion no matter the outcome. “Make it sweat” is their rallying cry, a playful and in-the-moment call to arms.

Styles have had the pleasure to grow with these two friends over the years. Though both have left the city for greener pastures in Asheville and Black Mountain, NC, they remain integral to our NY experience. Zach’s smile greeted us upon landing back in the city when Styles' was only just beginning, leading us down some life-changing sonic roads to eye-opening discoveries; Vic’s vocals on BASH003 changed our perspective on the range of music Styles should support. It is our distinct honor to share a snapshot of King Garbage’s vibe, one already called upon to support the greats - Ghostface, Raekwon, and Talib Kweli, to name a few - at their North Carolina stops. They are the new crop of American soul players, the Muscle Shoals Swampers of the file-sharing generation. Zach Cooper and Vic DiMotsis compose freewheeling and heartbreakingly endearing soul, embracing the roots of American music with Cheshire grins and a sound that's all their own.