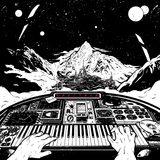 After releasing his self titled debut album mid-2013, Shook immediately dove back into his studio where he locked himself away for months.

“I had a lot of stuff on my mind and transferred it all into my music. Before I knew it, I had enough tracks for a new album” he explains.

Elaborating on the musical, more melody based direction he set out with his first album; 'Spectrum' explores more of his multi-facetted synthesizer sound, combining modern day production technology with musical elements and compositions stemming from the '70s and '80s.

First single 'Violet Hues' is riddled with a boatload of both modern and classic synth-sounds and accompanied by smooth vocals, characterized by the vintage Shook-sound, but with a more developed musical pallet. Ransom Note coined it "Think Blonde Redhead mixed by Johnny Jewel...One of the best tracks of the year".

His ability to blend his skills as a pure instrumentalist, as well as a university schooled producer, into a modern, popular sound, is the main ingredients for his current success. Playing classical compositions from the likes of Khachaturian and Bach in school, and practicing work from Antonio Carlos Jobim and Chick Corea in his free time, he gradually developed his own unique skillset, combining elements of classical, jazz, latin, soul, and funk. The characteristic sound partially originates from his use of historically renowned analog synthesizers, with every part recorded live in his home studio in the Netherlands.

After high school, he got accepted to COdarts Rotterdam, University for the arts, where he graduated in 2009, majoring in piano as well as modern day sound engineering. Unlike fellow students, he had the luxury of already being somewhat of a fixture in the electronic community by creating and promoting his music during his free time.

His first EP, 2010's 'The Glow', saw Shook burst into the electro scene with a mysterious comicbook-inspired persona, which still inspires his image today. With well received remixes of Phoenix's 'Listomania', Falullah's 'I lay my head' and Ellie Goulding's 'Lights', he instantly acquired a name for himself. A year later he dropped his next EP 'The Rise and Fall', described by Mixmag as "disco-electro gold", before his self-titled debut album topped the Bestsellers listing on Bandcamp.

In France he's made waves in the Nu-disco scene, playing live alongside Breakbot, Alan Braxe, Cherokee, Feadz, Zimmer and Anoorak among others. Shook's live show is a club-experience, combining his musical skills with dj-ing and on-the-fly-producing in one package.