TUNE The Last Skeptik - Show Me 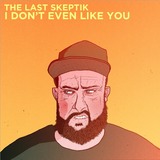 Its all about longevity in this game. From releasing his debut single featuring Sway, The Last Skeptik has been steadily gaining fans with his production prowess. Fast forward to 2013 and Skeptik followed up his critically acclaimed 'How Not To Make A Living' album with rapper Rewd Adams with his fantastically diverse, cinematic solo debut entitled ‘Thanks For Trying’ released on BBE Records. Following in the footsteps of J Dilla and Pete Rock, Skeptik took a leftfield approach, adding an orchestra of musicians over neck-snapping hip hop production to critical acclaim from press, fans and radio alike.

2014 has been just as busy with global tours, mixes on rotation for Noisey, BBC Radio 1Xtra and BBC Radio One, releasing a video for every song from ‘Thanks For Trying’ (16 original videos in total), composing soundtracks to BAFTA nominated short film ‘Island Queen’, Vice Magazine’s documentary on Atlanta Stripclubs as well Powerade's Brazil World Cup campaign advert.

Now ready to unleash his highly anticipated ‘I Don’t Even Like You’ EP on BBE Records, Skeptik has been busy in the meantime - writing, remixing and producing for a bevy of artists such as Gorillaz, Grouplove, Scrufizzer, Trim, Dream Mclean and FEMME, with the latter two being the sole guests on 'I Don't Even Like You'.

Add to that scene stealing DJ sets around the globe, from Coachella to SXSW and beyond, DJing for Femme, Doc Brown (for his live comedy show) and the late Guru from Gangstarr, guest DJ mixes for everyone from BBC Radio One, BBC 1xtra, & BBC 6Music, to Fabric, Clash and Vice Magazine, and opening up shows for 2Chainz, Childish Gambino, Wu Tang Clan, and Zero 7.

Skeptik has performed alongside an eclectic selection of modern greats such as Damon Albarn, Flea (Red Hot Chill Peppers), Hudson Mohawke, DOOM, Wu Tang Clan, Danny Brown and Tony Allen among many others, rocking parties for Nike, Red Bull, Puma and G Shock and DJing as far afield as Japan, America, and the Middle East.