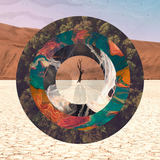 “An organism at war with itself is doomed” – Carl Sagan

This concept sits at the heart of Wilderness Hymnal’s debut album ‘Anthropocene’, nine tracks spanning inventive post-rock, stormy piano passages and unnerving psychedelia that explore ecological and emotional harm, and the parallels between them.

Roaring guitar drones play off against skittering electronics, while grand piano and pummelling drums enter lockstep and soaring vocal harmonies cut through the murk. The solo project of British-Venezuelan singer and pianist Javier Wallis, ‘Anthropocene’ finds him disregarding the limits of genre in favour of striking dynamics and dreamlike, exploratory structures.

Reflecting the acceleration of a confused and crumbling world, Wallis describes writing the album as a refuge and means to express the “impotent rage, fear and powerlessness” he feels around the growing threat of climate disaster, political upheaval and relentless consumerism. Hints at a dark personal history also creep into the frame, while the title comes from the proposed term for the current geological epoch, marked by the overwhelming alteration of nature, land and climate by human activity.

Recorded in Salford and Bristol by Wallis and producer Joe Garcia in the winter of 2016/17, songs move through landscapes of colour - evoking natural environments from the oceanic expanse of Abyssal, to the molten, volcanic tendencies of Aorta and Caldera. Joined by guitarist Mike Kelly and drummer John Simm (of math rock heroes Cleft), the trio expand the piano-and-electronics template of previous work into a vibrant new prospect.

With a striking visual universe accompanying the record, including artwork and design by Wallis, the album will be released on digital formats, alongside plastic-less physical media - with album bundles including a fine art print, or carbon neutral t-shirt.

Available to pre-order from 28th September, the album launches with a full-band show at Aatma in Manchester on 29th November, plus UK dates to follow next year.