Back to ETCHES's Music <
Single 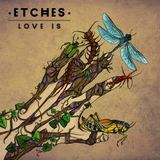 ETCHES release new single, Love Is, and prep new EP for sale at UK tour dates Filled with tales of the human condition, immersive melodies and anthemic indie-rock accents, for those new to Liverpool’s most innovative and fresh five-piece one point becomes clear on first impressions alone- the troupe are destined for very big things. Immediately accessible, and yet never predictable, ETCHES are readying their new single, Love Is, to land on 8th April via the Playing With Sound imprint. Again the work reveals a band at the top of their creative game, crafting emotionally captivating music that seems to speak directly to the listener. The band have also prepared a full EP, Wall of Sleep, for sale exclusively at shows scheduled for spring 2016. Veering from the stark, tender emptiness of The Great Void, its sparse vocals, hypnotic low ends and eventual wailing six strings; to the booming, far noisier guitars of Do Nothing, it’s more proof that the quintet refuse to pander to stereotypical patterns or blueprints. Instead, they create a sound that’s as timeless as it is contemporaneous. At once calling into mind early Editors, a stripped down Elbow, and The Incredible String Band- indicative of the scope at play here- the new release confirms their status as one of the most exciting outfits emerging from a northern city in rude aural health right now, bringing influences from electronica to post punk and psychedelia into the melting pot, winding up with something somehow familiar yet unarguably original. Not the easiest tones to achieve, that this is as impressive in the studio as it is on stage only provides more proof of just how bright their future is, and explains why the expectations for their forthcoming UK tour are so high. ETCHES UK Tour Dates 1st April - Tooting Tram Social, London 6th April - Headrow House, Leeds 7th April - The Castle, Manchester 15th April - The Dog & Parrot, Newcastle 23rd April - The Rocking Chair, Sheffield