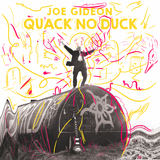 Ahead of the release of his upcoming new album, Armagideon, out 31st January 2020 via Clouds Hill, Joe Gideon has announced new single ‘Quack No Duck’. The track, produced by Jim Sclavunos (Nick Cave & The Bad Seeds/Grinderman), is available for airplay following its release on 29th November 2019.

A gorgeous, lo-fi, piano-led ballad, Quack No Duck reflects on the personal with introspective lyrics:

“'Quack No Duck' is a song about moments in death” explains Joe. “Both broadly speaking and through personal experience. The lyrics are quite ethereal for me, touching on concepts such as the ‘Noosphere, the planetary sphere of reason’ and Vitalism, in which the soul can be measured as a ‘vital spark’”.

The new album was written and recorded with Sclavunos whom Joe met on tour in 2012 with his band Joe Gideon & The Shark, and their band mate Gris-de-Lin. Joe, Gris-de-Lin and Jim play all the instruments in the densely layered arrangements, which include an army of saxophones, an antique piano, a cranky old synth-vibraphone rescued from the dumpster, heavenly choirs and a menagerie of percussion instruments. The new single is a statement of intent ahead of the new album release -- the listener can look forward to Joe’s ruminations on, amongst other things, time travel, primordial bliss and reptile people.