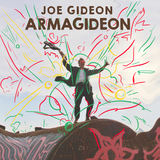 On 31st January 2020, Joe Gideon will be releasing his brand-new solo album ‘Armagideon’ via Clouds Hill.

The new record was written and recorded with Jim Sclavunos (Nick Cave & The Bad Seeds/Grinderman), whom Joe met on tour in 2012 with his band Joe Gideon & The Shark, and their band mate Gris-De-Lin.

Joe, Gris-de-Lin and Jim play all the instruments in the densely layered arrangements, which include an army of saxophones, an antique piano, a cranky old synth-vibraphone rescued from the dumpster, heavenly choirs and a menagerie of percussion instruments.

The record’s new single ‘Rule Roost!’ is a statement of intent ahead of the new album release, highlighted by its infectious, harmony-layered chorus and off-kilter beats.