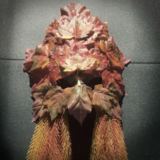 Max Turner’s unique and experimental sound is inspired by a range of different cultures, primarily where East meets West and the contrasts and blends of traditional instrumentation with electronic production.

By linking up the sonic similarities of the bodhrán and the tabla, the darbuka and a tin snare drum, the celtic flute and the aboriginal reed, the Shrutibox and the bagpipes, with the addition of electronics and rap lyrics, Turner creates a truly unique atmosphere with his sound.

Drawing on the sonic affinities of indigenous cultures prior to librarian distinctions, where the beating of animal skins and hollowed out pumpkins meets the calls of night owls and reflections of a human nature dancing, he aims to replicate electronic music in our modern time through completely different means.

The Scottish-German producer, whose highland family is several generations Indian-born, has been releasing music since 2001 and has worked with artists such as Schneider TM, Cristian Vogel and Kouhei Matsunaga, delivering his own cryptic interpretation of rap with dabs of spoken word and poetry.

Producing electronic music after his 2001 debut on Felix Kubin’s Gagarin records he turned eastward in his late twenties and spent 5 years living in southern india from 2009 to 2014, learning rhythmic signatures and unsegmented emotional codes of medieval subcontinental music that naturally linked up with a long love for west indies dance culture and tribal music impulses the world over, which infuse his new release with an array of starkly traditional sounds, momentarily touching on aspects of footwork and polyrhythmic percussion between more modern snare rolls, analog sounding synths and sub-basslines.

He cites his closest musical and visual influences as Sun Ra, something that is reflected in his extensive use of costumes and masks, and American musician Moon Dog, the former drawing on Middle Eastern and African influences and the latter on Germanic and Celtic, but is heavily influenced by dub producer Lee Perry and even more mainstream sounds that revive archaic rhythm patterns such as Lenky whose Diwali rhythm and MIA’s whose tamil pop references one might also be reminded of.

Lyrically, Turner has been drawing on influences as far flung as the New York rapper Kool Keith to Persian poet Jalāl ad-Dīn Muhammad Rūmī, and finds a seeming grey zone of nature and urban myth: “It’s your boy, nature boy, raking in the green with autumnal joy, shaking the tree, fist full of leaves, money change color till your assets freeze”.

Utilising his studies of Carnatic music, the new single features a hint of eastern rhythmic patterns combined with a tin whistle that garnishes the dancehall feel. Drum fills add to textural complexity of intricate tribal percussion and while parts of the rhythmic structure are reminiscent of west indies producers such as Lenky, there are hints of Moon Dog and more down to earth acoustic facets to be heard. Throughout the track Celtic bone percussion is audible between the more midrange toms that hold the frame work of the track together, with a driving sub bass moving the track toward the dance floor.   Coming from a combined background in puppetry as well as rap vocals over a period of two decades Turner explores costumes and stage personas, in this case the character name is 'Nature-boy aka Treedog'.

On his debut single “An Element To Behold”, his first release of 2019, Turner also combines all these elements for a truly unique offering: bubbling clicks and whistles, traditional Indian rhythms and burbling synths combining to create rich layers, all wrapped around his throaty vocal.  In the track's accompanying video the costume of the character, another of several Max wears in his live show, is named ‘Moonface’. Drawing on a multitude of traditional themes from Coptic Christianity, Celtic druidism, Greek scholars and Maghreb desert tribes, Moonface’s mask represents a moon of the planet Saturn, which is named "Prometheus" from the Greek myth where fire was stolen from the gods.  Max performs live with these costumes and make the masks and costumes himself.