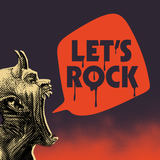 Featuring the band’s unique blend of ferocious but catchy song writing, the track is a highlight of the new record. With its headbanging, foot stomping, driving, low-slung guitar rhythm, booming drums and ‘Let’s Rock!’ moniker, the single is an ode to metal bands through the ages.

Much like the rest of Viscerals, Hells Teeth is Sabbath-esque but also a distillation of the biggest, heavy tunes from the 70s, 80s, 90s and 00s such as Black Flag, Melvins, Nirvana, Soundgarden, Boris and Sunn0))), with Bill and Ted, AC/DC's 'Rock In Peace' and the surrealist art of Vali Myer to boot.

“Hell's Teeth is an ode to eccentrics, dreamers and outsiders” says singer Matt Baty. “It's for those who are delirious, those who are bewildered, those who are at odds with the foreboding world that surrounds them but against the tide, find the energy to express themselves and support each other with great love, integrity, empathy and passion”.