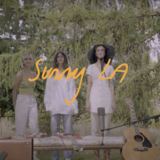 Velvet Volume are a rock outfit from Copenhagen comprised of three sisters, Nataja (20, drums), and twins Noa (22, vocal and guitar) and Naomi Lachmi (22, vocal and bass).

Brimming with attitude and punk sensibilities, the trio’s sound is reminiscent of bands like Yeah Yeah Yeahs, Dream Wife and Hole, with lyrics about relationships and the pains and restlessness of youth.

The track follows previous releases ‘Carry’ and ‘Lonely Rider’, which were featured across BBC Radio 6 Music, reached #1 on Danish radio station P6 Beat’s chart, with the latter being latter being described by Clash Magazine as sounding like “Sleater-Kinney's daring idiosyncrasies, or even early Hole's primal bite, but truly this Danish project has a taste and atmosphere of its own”.

The record follows the trio’s breakthrough 2017 debut album Look, Look, Look, which created ripples across Europe and saw them pick up an eclectic and impressive list of achievements ranging from playing Denmark’s top metal festivals, selling out shows across the continent, and recording the theme song for the Danish version of The Powerpuff Girls.

The album, which was recorded in their hometown Aarhus, Denmark, cramped together in a small, emptied swimming pool to make sure they got the live sound on to the recordings, ended up receiving critical acclaim internationally from the likes of Rolling Stone, NME and The Line Of Best Fit, who described the record as “simply superb”.