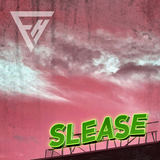 To say False Heads had a big 2018 would be a huge understatement. The scuzzed up, alt-rock 3-piece travelled extensively to promote their highly-anticipated ‘Less Is Better’ EP and now they’re back with an onslaught of activity. After sharing a stage with the likes of Queens Of The Stone Age and David Byrne, as well as picking up support and plays from BBC Radio 1 and Huw Stephens, they’ve been setting themselves up for even more domination, as they crash into 2019 with one of their most explosive tracks to date. ‘Slease’ lands on the 1st March and acts as the frontrunner to a monstrous campaign.
Blisteringly confident in their lyrical projections both on and off the stage, the East-London trio aren’t shy of voicing their opinions on politics, socialism and the media, and ‘Slease’ is no exception:
“The song is really about being in a terrible mental state and everyone chipping in whether you want them to or not. It's also about being okay with that state and revelling in it, which is never really a good thing”
Their messages and views go hand-in-hand with the gnarly chaotic sound of Luke Griffiths’ pick-axe-to-the-ear riffs and raw growling vocals, Jake Elliot’s psychedelic-infused rumbling basslines and Barney Nash’s explosive powerhouse drumming.
Bringing their ferocity and energy in true False Heads style, ‘Slease’ ticks every single box in the world of post-punk rock. Raspy screams, a grinding bass hook, battering beats and a whole array of feedbacking, whiney, grunge guitar riffs that will have the hairs on the back of your neck standing on end from the get-go. The eerie foundations of the record are harnessed by the ever-anthemic chorus that features delicate underlying ‘ooo’s’ from Barney Nash, as well as a call and response that you just can’t help but sing along to. Fusing a frenzy of noise with gentle, intricate melodies is just one of the many aspects of False Heads’ signature sound, not to mention their ability to build up an entire song into a devastating, explosive racket of a drop.
After being included in Apple Music’s Breaking Rock, Rock Workout and The A List playlists, as well as New Punk Tracks, New Noise and The Scene on Spotify, not to mention radio plays on BBC Radio 1, BBC 6 Music, Radio X, Sirius XM, Absolute Radio, Amazing Radio and Kerrang! False Heads’ fearless approach has resulted in mammoth support on a global scale, including a huge collective thumbs up from ex-Ramones manager Danny Fields, Iggy Pop, Rodney Bingenheimer, Frank Skinner and being a part of The Independent’s ‘One’s To Watch in 2018’ list.
With shows locked in to support the launch of ‘Slease,’ and the wheels of their debut album now in unstoppable motion, 2019 will be their most ambitious year to date and they want you to be a part of it. Who’s in?

Comments and support:
“What an incredible racket” – Huw Stephens, BBC Radio 1
“Rocking and hooking, if they were in my town I’d show up for that – 8.5/1.0” – Iggy Pop, BBC Radio 6 Music
“Absolutely Fantastic.” – John Kennedy, Radio X
“East London based three-piece hellbent on bringing irreverent levels of noise, confusion, passion, and excitement back into guitar music.” – Drowned In Sound
“An explosion of post-punk goodness” – It’s All Indie
“A string of single releases earning praise from all corners - including this very site. A visceral, feral live experience” - Clash
“Far from touting controversy however, the trio have just stuck to their guns, refused to compromise on their politics, and as a result, are one of the few bands currently keeping the original spirit of punk alive, while dragging it kicking and screaming in to the present day.” – Louder Than War