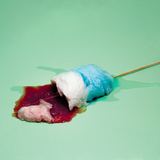 False Advertising announce UK tour supporting Gender Roles and release new single Uncomfortable, which is also available as a free download, which you can listen to/watch/download from here: http://lnk.to/uncomfortablefa

From guitarist/drummer/vocalist Jen Hingley on the meaning behind 'Uncomfortable' -
"It's written from the point of view of having had to grin and bear someone's frustrating and antagonising actions towards you over a period of time, so as they have become unbearable, and you can't help but having to call them out about how they have made you feel. It's a reminder that speaking up about people who have treated you badly is perfectly alright, and doing so can help you move on with your life."

The track is the final single to be taken from their recently released 'Brainfreeze' album (released to much acclaim in November through Alcopop Records) and follows on from previously released singles 'You Won't Feel Love' and 'Influenza', which between them were added to Radio X playlist, Amazing Radio A list, were a Radio 1 Rock Show exclusive premiere, an Annie Mac 'New Name', played across 6music - the band also recorded a live session for Tom Robinson on 6music. The band have also featured in Clash, NME, Kerrang!, Upset, Rock Sound and more.

For all live shows, check: http://falseadvertising.co/live