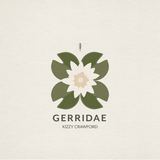 As performed live on BBC Woman's Hour on BBC Radio 4 and Gaby Roslin's BBC Radio London show.
One of the double A side single tracks from Kizzy Crawford which was released on August 26th on Folkstock Records.


Kizzy has been chosen as one of the 'set piece' artists for A Level Syllabus in Wales for the academic year starting September 2016. She sits alongside The Manics and Super Furry's and is the youngest singer songwriter to be so honoured.

"WJEC is very pleased to be able to introduce the songs of Kizzy Crawford to our new A2 Music specification. It is hoped that students around Wales will take inspiration from her, as a young Welsh singer song-writer, and produce their own music, following in a great tradition of Welsh artists". WJEC

I wrote Gerridae about my transition from a young woman to an adult, the feeling of having to follow others to be successful, not trusting in yourself and trying to fit in to society during this awkward period. A gerridae is a pond skater and I imagine the way it would move across the water; slowly and calmly, at ease with itself or quickly and randomly, panic stricken. Much like moving through life. Every now and then you’ll come across an obstacle, a lily pad, which you can’t work out how to get past. Other times nothing stands in your way of going where you want to go. I like comparing life to patterns in nature, it seems to make more sense when you look at things that way.

Gaining BBC Radio 1 play with your debut single release is a pretty astonishing boost for anyone, but 20 year old Welsh/Bajan artist Kizzy Crawford, is not one to rest on her laurels. Her solo career began just three years ago and she is on a mission - a mixed race Welsh speaking artist proud of her background and determined to make her mark by fusing bilingual soul-folk jazz. Kizzy’s already getting national recognition for her work; in addition to airplay on Huw Stephens show on BBC Radio 1, she’s had plays on BBC 6Music, BBC Radio 4, BBC Radio 3, BBC Radio Wales, BBC Radio Cymru as well as live TV performances on S4C, Children in Need for BBC 1 and the 6 Nations advert campaign. Not surprisingly, she was won awards too,-the 'Brwydr Y Bandiau' at the National Eisteddfod 2013 and a Welsh Singer-Songwriter competition receiving money to record her first EP 'Temporary Zone' with Amy Wadge (Ed Sheeran co-writer). Over the last three years, Kizzy has developed an increasing sophistication to her songwriting and performance, which is complimented by her soaring voice that boasts both range and charisma. Her forthcoming double A side single release showcases her writing and performance to perfection.
In 2014, Kizzy signed to publishing company BDi / Bucks Music and she was then selected as a BBC Horizons 12 Artist which included the opportunity to perform a live session at BBC Maida Vale. Kizzy was also a featured artist with Gwilym Simcock for a BBC Radio 4 music programme and she was invited to perform on The Verbs ‘Young Talent’ programme for BBC Radio 3.
Kizzy is the youngest singer songwriter to have her work selected for ‘set pieces’ for the Welsh examining board (WJEC) for their A Level Music syllabus, for the year 2016/17. Her compositions will stand side by side with Gruff Rhys, Super Furry Animals and the Manic Street Preachers and will include the songs Gerridae and Jungle, which were released on August 26th 2016.
Kizzy’s tracks ‘Caer O Feddyliau’ featured on an ident for S4C and her track 'Shout Out'and Welsh language version 'Yr Alwad' featured in the 2015 VISIT WALES TV & online ad campaign.
Kizzy is published by BDI Music. This double A side single for Gerridae and Jungle which was released on 26th August by Folkstock Records.