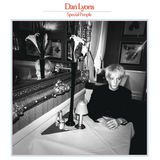 “The multi-faceted Dan Lyons . . . reminds me the more solitary work of Damon Albarn & Graham Coxon” – Steve Lamacq Following two single releases last year that enjoyed love and support from BBC 6Music DJs Steve Lamacq, Chris Hawkins and Tom Ravenscroft, Radio X DJ John Kennedy plus Clash Music, So Young and others, Kent based musician and songwriter Dan Lyons releases his debut five track EP Special People on 12” vinyl this spring. Perhaps previously better known as the drummer for bands such as Fat White Family, Phobophobes and Misty Miller, Dan’s real job is a songwriter, whose sound has been described as “quintessential surrealist Anglo-pop” with “touches of Echo & The Bunnymen and ‘White Album’ era Beatles, entwined with lo-fi sensibilities that nod towards The Go Betweens, Syd Barrett and The Clean”. The opening and title track on the EP, Special People, was written in a five-minute spurt of inspiration while Dan was living in West London. “It’s about the glitterati”, says Dan, “you know those people who are famous for just being famous. The more you look, the more you see these kinds of people. They’re everywhere.” Produced by Dan and mixed by Margo Broom (Fat White Family, Phobophobes), Special People kicks off with an infectious earworm of a guitar riff, that reappears in all the right places down the track and complements Dan’s characterful vocal on this energy-packed slice of indie pop. Next up, a version of the Lou Reed classic Waiting For The Man recorded by Dan at home in Margate and mixed by Yiğit Bülbül (King Krule, whenyoung, Gary Newman x Officers). It’s a current fan favourite in Dan’s live set that doffs-itscap to the version performed by Bowie with Lou Reed, whilst on tour in the early naughties. Side 2 of the EP opens with Gargoyle, a track that Dan wrote with Sean Lennon whilst in New York and is a song about how nobody looks up in NYC as well as being a song for people who don’t get the recognition they deserve. The final two tracks were recorded at Ramsgate’s Big Jelly Studios and produced by Dan and Chris Hayden (Florence & The Machine’s drummer / MD). The first: Home, is an intimate ballad about a man lost in his own mind and desperate to find clarity - his home is his anchor but it’s pulling him down. The track is a great exponent of Dan’s talent in relaying a great story in his lyrics. The EP’s closing track Seaside Politics is about Dan’s current hometown of Margate, Kent and was written when he first moved down there after living in London. Lyrically it tells of the German Luftwaffe unloading shells on the town while on their way back home during the WW2 raids, likening the sentiment to people who unload their destructive emotions aimlessly on others. Dan’s live shows go from strength to strength, switching between visceral intensity (obviously inherited from his misspent youth) and a beautiful, haunting melancholia. A short tour is in the works to support the EP release plus a debut album is set for release later this year. For updates on gigs and more please visit the website and/or follow his socials - www.danlyonsmusic.com