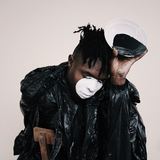 Singer, producer and multi-instrumentalist Azekel continues to surprise and challenge the musical order in 2018. Case in point new single Hollow, taken from the second chapter of his forthcoming debut album Our Father, due on 11th May. The album, released later in the spring, will be unveiled in three chapters, ‘Family’, ‘Mental Health’ and ‘Youth’.

Hollow sets up the narrative for Chapter 2 perfectly; genre melding, percussion heavy and wrapped around Azekel’s distinct, soulful tones, Hollow is anchored by a social commentary and candid conversation which have become commonplace in the rising star’s music. Pondering on his character’s journey, Azekel writes “is this the curse to all this wealth? /I’m so low/this ain’t how it used to be”. Azekel’s voice on this topic is a refreshing addition to the once taboo topic within the black community. At the end of the track, he melodically cries “Sweet Jesus help me!” This song feels as honest as a journal entry, and reveals some of the unspoken conversations that too many creatives internalize.

“Mental Health” will be told across a trio of songs, the aforementioned Hollow, alongside Pyramids and Starships and Loading, and follows “Family - Chapter One” which featured the recently released Black Is Beauty (Daughters), Don't Wake The Babies & Can We Have Fun (In This House Tonight?). ‘Family’ was accompanied by a beautifully directed, Malick Sidibé inspired short film by The Rest (Kojey Radical, Little Simz).

2017 was a busy year for the ascendant British musician. Azekel collaborated with Gorillaz on their most recent album Humanz, performing at the album launch at London’s Print Works alongside the all star likes of Pusha T, De La Soul, Popcaan, Danny Brown and Noel Gallagher. He featured on “Momentz” and “Midnite Float”. He also toured Europe with Banks and Hong Kong and Japan with frequent collaborators Massive Attack (with whom he co-wrote and featured on the title track of their recent EP “Ritual Spirit” – the video of which featured legendary supermodel Kate Moss).

Azekel’s solo work has received high praise and picked up supporters like Prince, racked up millions of streams,, saw him record at the iconic Abbey Road studios and perform at Glastonbury and London’s Hyde Park. As an artist he seamlessly weaves a wide range of influences into his music, from soul, jazz and R&B to sparse electronics and dub, and points to people as varied as Miles Davis, J Dilla and D’Angelo as inspirations.

"if you’re not in love with Azekel already, you will be after you’ve heard this.” Wonderland

"the sonic equivalent to bailing on your evening plans and instead hibernating with the best human you know.” I-D

“One of the UK’s best voices.” Gal-Dem

"Can We Have Fun (In This House Tonight)” is joyful electronic soul." The Fader

“Intelligent, engrossing soul music with a defiantly modern feeling, 'Don't Wake The Babies' is the work of a truly individual voice, one that could dominate 2018.” Clash