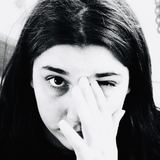 Following multiple performances with The National—including last month on Jimmy Kimmel Live in Brooklyn, NY—Eve Owen announces she has joined 37d03d Records (pronounced people). The London native has also shared her Aaron Dessner-produced debut single, 'She Says', which showcases the power of her warm, enchanting voice and tender songwriting.

An intimate portrait of loneliness and longing, the song “came from realizing how lucky I am to have my family, and wondering what it would be like if my parents weren’t there for me,” Owen explains. The poignant accompanying video for 'She Says'—directed by her sister and frequent collaborator, Hannah—mirrors the song’s search for meaning and connection. "When working together professionally, we always lean into our relationship as sisters. It’s always a really natural and organic process,” says Hannah Owen. "We shot this video on an iPhone using stop motion. It was just the two of us working alone for three days. The ideas shifted and changed throughout the shoot. We really wanted to create an atmosphere where we could play off each other and experiment.”

The now 20-year-old Owen wrote “She Says” at age 14, after first exploring songwriting at 11 as a means of making sense of her world and the uncomfortable nature of growing up. Owen counts Dessner—as well as her beloved, ukulele-playing grandfather—among her musical heroes, and after crossing paths three years ago, the two struck up a creative partnership. “Eve came up to visit the studio for a day a few years ago when she was 16. I thought we would record one song but we ended up working on several in just one day. By the next morning she had written a few more songs based on her experience the previous day. This prolific songwriting continued throughout our work together. Every morning there would be new songs, written sometimes overnight,” recalls Dessner. "I’ve been lucky to work with some incredibly talented artists and it was clear to me immediately that Eve was deeply gifted, expressing herself with such force and sincerity on essentially her first proper recording day at Long Pond. I was spellbound.” Recorded at his Long Pond Studio in upstate New York, “She Says” serves not only as an introduction to a striking new talent, but also as an early preview of Owen’s forthcoming debut album.

Owen—who also lent vocals to The National’s recent album, I Am Easy To Find—will support Hayden Thorpe on multiple shows in the UK this month and next. More news regarding her debut album will be announced soon.