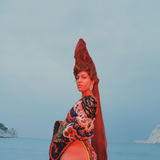 Lafawndah announces her debut full length album Ancestor Boy, set for release on 22nd March 2019 via her own label imprint CONCORDIA, is a bracing statement of intent, heralding an artist unbound in scope, scale, and intensity. She opens 2019 with bold single DADDY, plotting new territory onto her own highly personalized map of influence – a map drawing the club, composition, and pop into thrillingly unresolved, ultramodern erotics. Lafawndah says "Daddy is a song about legacy, family secrets, what you decide is yours and what you decide to let go cause it belongs to the people who made you and to the people before them."

Lafawndah’s 2018 was filled with myriad musical highlights and successes - including a celebrated performance featuring peers Tirzah, Kelsey Lu and more at London’s South Bank in December, growing from her acclaimed HONEY COLONY mixtapes. Meanwhile her heart-stopping inter-generational music & film collaboration with japanese ambient legend Midori Takada in Le Renard Bleu (with KENZO and Partel Oliva) continues to echo into new forms, with a full production performance titled ‘Ceremonial Blue’ premiering at the Barbican, London in April. And streaming now, her achingly beautiful self-directed video for JOSEPH - a lullaby and an ode to newborn life co-written with Jamie Woon and also featuring on ANCESTOR BOY - has set Lafawndah apart as an independent director with a singular vision spanning multiple media and artforms.

Having in her prior self-titled and TAN EPs upturned geography, in ANCESTOR BOY Lafawndah digs deep to unravel geology, mining emotions of the deep past and future. The album’s physicality is elemental; its memory, mineral. It is a becoming- of- age story for a people yet to come, created out of a need to find the others. In the middle of the album’s sonic and lyrical onslaught is the desire to share the uncertainties of growing up when you don’t belong anywhere.

Crafted with the aid of fellow travelers Nick Weiss, Aaron David Ross, and L-Vis 1990, ANCESTOR BOY’s maximalism- it’s overflow of detail, of feeling, of ideas- serves to amplify a frequent lyrical motif: the sensation that one body, one lifetime, isn’t big enough for what you’re feeling. The record is pregnant with memories shared across more than one mind, recalling the storytelling antagonisms of Nina Simone at her most strident and unpredictable. In response, the rhythmic aggressions of her music have grown even more determined and psychedelic, drawing a line in fire between Jimmy Jam’s turnt industrialism on Control ​and the furious unease of ​Red Mecca-​era Cabaret Voltaire.

With a palate equal parts chrome and dirt, ice and depth, Lafawndah’s finesse with song architecture imbues the LP with an uncanny addictiveness: anthems loaded with trap doors. ANCESTOR BOY imagines a pop music that is neither imperial nor local, but a freedom of movement; a residue, perhaps, from the album’s nomadic creation between Los Angeles, Mexico City, New York, London, and Paris.

Lafawndah will be performing in 2019: