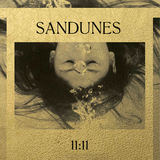 INTRODUCING: SANDUNES - Mumbai base producer + multi instrumentalist signs to iK7 - new single ‘Eleven:Eleven' feat. LANDSLANDS impacting 18th October - new EP '11:11' out 6th September - Headline London show @ The Pickle Factory on 12th September Sandunes – the musical output of Mumbai-based producer Sanaya Aredeshir – shares her new EP ‘11:11’ out today (6th September) via !K7. The EP release coincides with a headline show at London’s Pickle Factory on September 12th, and she previews it with the EP’s title track, "Eleven Eleven ft. LANDS LANDS” via Dummy. The meditative, devotional soundscapes Sandunes offers up on the ‘11:11 EP’ take us on a spontaneous trip, “My fascination here isn't about the numbers itself, as much as it is about these repetitive occurrences that we’re happy to call coincidences. When I was thinking about what I should name the song, my eyes fell on the time, and it was 11:11” Sanaya explains. She is an artist fascinated with textures - of spiritual lines, astronomical ones, and of course, her sound which too is a textured canvas. Her current work merges classical and delicate bassy, hip hop instrumentals. The ‘11:11 EP’ was written and produced through a number of transitional moments in Sanaya’s life and recorded between Mumbai, London and Berlin. Taking about it she says, “Once the scratches of this material came together, and we’d decided to record a bunch of drums on all of the tunes - the whole feel of this batch of music wanted to be half-way between an organic world and a synthesised/metronomical/digital world.” The work connects threads between Philip Glass, Andrew Ashong and Anoushka Shankar. That she cites the experimental folk electronic music of Sudan Archives and cinematic jazz soundscapes of Jordan Rakei as inspirations, too, is no surprise. Her work is an homage to what she calls the “diverse spiritualists” that surround her. Sandunes already has a long list of collaborators including; Anchorsong, Bonobo, Richard Spaven and Jordan Rakei, and her work also continually highlights the talented artists working in the Mumbai electronic music community. For Sanaya, passing the blessing on, inspired by her formative experiences in Pune is crucial to the work and she is a member of DASTA - a community collective of six beatmakers at the forefront of India’s electronic music scene, and runs courses for young producers and artists committed to exposing, promoting and exporting the music. '11:11 EP’ features vocals from fellow Mumbai residents Landslands. In 2017, Sanaya worked with the Barbican as part of their Different Trains 1947 project, a collaborative response by artists including Actress and Darkstar responding to the 70th anniversary of the declaration of India’s independence. The next few months sees her at Lisbon’s Nova Batida, headlining a show in East London at The Pickle Factory and an upcoming South East Asia tour, continuing to stretch her sonic soundscapes across geographical plains. Although the wide-ranging locations and inspirational points have imprinted differing images on the patina of ’11:11’, Sandunes’ point of view is distinct - Indian, powerfully feminine and all with a central purpose - to make you dance. Sandunes live dates: Sept 12 - London, UK - The Pickle Factory '11:11' track list: 1. Eleven:Eleven ft LANDSLANDS 2. Shift 3. Glock 4. 11:11 (instrumental) 5. Ever Bridge