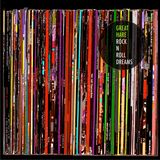 If you only listen to one song tonight, make it “Rock n Roll Dreams” by Great Hare (2014, from the “Rock n Roll Dreams” single).
Great Hare is an indie rock quartet from Gothenburg, Sweden. I don’t know much about these guys, but their bio suggests that the members of the band have been in other indie rock bands going back to the 1990s and the heyday of MTV’s “120 Minutes”. Apparently, they’ve all been out of the biz for a while, but they decided to form Great Hare a few years ago.
It looks like they self-released an album last spring and have self-released a handful of singles since then. This is the most recent release, which landed in my mail bag a couple of weeks ago.
I don’t know which bands the guys used to be in, but they say that Great Hare is influenced by the likes of The Cure and Lou Reed. In this song, I hear a bunch of Broken Social Scene. I mean A BUNCH. In fact, I’m not even sure that this isn’t some of the guys from BSS in disguise.
I’ve heard a couple of songs from this band, and although they’re unsigned at the moment, I don’t expect that to be the case for very long. This Is That Song

"It was now some while ago that we first fell down the particularly accommodating dream-pop rabbit hole that was What Went Wrong? from Gothenburg four-piece Great Hare, and the comparatively giddying, if commensurately winsome Rock n Roll Dreams had us in a similar tizzy even from an inaugural play. Envisage Thurston Moore “drinking to stay awake” while again refining, and in turn redefining expansive lo-fi together with Emanuel Lundgren and Luke Steele, and you’ve a vague image of the Scandi-rock perfection that Great Hare this time trend in. And without doubt, it’s such stuff as dreams are made on." Dots And Dashes

"The song title pretty much says it all. From Sweden, Great Hare and an indie-rock group, and the lyrics here spell out their goal: "I was just another teen, with a head full of rock n roll dreams". Well they've followed their dreams and are now in a modern rock n roll band, and despite sticking to convention, one that knows how to knock out a tune too."
The Sound Of Confusion

"It seems like everyone who’s heard this song has fallen for it on first listen. Like their older tracks, the latest from the Swedish 4-piece had Dots & Dashes “in a similar tizzy even from an inaugural play…giddying, if commensurately winsome…without doubt, it’s such stuff as dreams are made on.”
“I had this poster on my wall between The Cure and The Fall… I was just another teen with a heart full of rock ‘n’ roll dreams.”
Don't Need No Melody