Back to Happy Science's Music <
Single 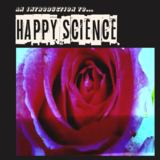 “Really cool!” – George Godfrey (Radio X) “Diggin’ ‘An Introduction To…’ Reminds me of KLF” – Sam Chamberlaine (GIITTV / 1883) “I love it” – Rhys Downing (Mark Ronson, Peter Doherty, Bruno Mars) “I like it… reminds me of Graham Coxon” – Jon Bills (The Bills Agency) Happy Science have dropped the first taste of what’s to come from the exciting North London based four piece, with the aptly named An Introduction To… Happy Science impacting on Friday 28th February on AvidPlay Records. Inspired by Alfred Hitchcock’s famous Definition of Happiness interview, An Introduction To.. sets the scene perfectly for a band poised to make waves in 2020. From pub-going eccentrics to creative dynamites, Happy Science are the band you can’t live without. They claim to be an “alternative to alternative rock music” and their fuzz filled, modern pop offerings more than live up to that claim. Happy Science are not a band in any traditional sense of the word. A collective of producers, mix engineers and multi-instrumentalist songwriters; Happy Science are a melting pot of creative innovation. An Introduction To… is dripping with culture and inspiration drawn from outside the boundaries of regular rock music. The entire tune is interwoven with spoken word, catchy hooks and samples, including the famous Hitchcock interview where he discusses his idyllic vision of happiness. With a diverse range of influences, from political change to art, culture, protest, film noir and more; Happy Science are a modern day musical equivalent to the films of Stanley Kubrick and Alfred Hitchcock. You can hear the raw voice of working class North London estates clash with fuzzed drenched guitars and pop sensibilities. Musically, the band has cited Sonic Youth, The Velvet Underground, Can, NEU! Kraftwork, Blondie, The Last Poets and Pixies as key inspirations. For fans of: The Murder Capital, Idles, Shame, Fontaines D.C, Italia 90