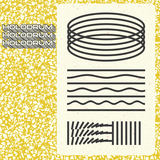 Formed in Leeds but crackling with a Trans-Atlantic energy, Holodrum are a seven-piece coming together of collaborators old and new to create something that uproots the punk and repeato-rock foundations that many of its members had explored in previous projects and relocates them amidst a shared love of the early DFA Records movement, and further back to the likes of Liquid Liquid, Konk, Talking Heads and Tom Tom Club.

Together, Emily Garner (vocals), Matthew Benn (synth/bass/programming), vJonathan Nash (drums/programming), Jonathan Wilkinson (guitar), Sam Shjipstone (guitar/vocals), Christopher Duffin (sax/synth) and Steve Nuttall (percussion) came together from various other projects either defunct or on a break, and as a result there was a real focus on creating something that collectively felt fresh on a creative level. Demos have been pieced together as the band moved around various rehearsal spaces in Leeds, tracks forming out of live ideas furthered and extended.

'Lemon Chic' is the third track to drop from this original set of recordings following on from the warped disco of ‘No Dither’ and the introspective throb of 'Low Light'. Potentially the most streamlined, club-ready cut in the band's repertoire, 'Lemon Chic' is carried along on a wave of Metro Area-esque percussion and cosmic arpeggios, littered with rolling timbales and post-punk guitar stabs. Finished in one last inspired session before the social apocalypse, in an attempt to evoke the glorious union of Nile Rodgers with the tang of yellow citrus fruits, Holodrum invite you to boogie at a distance, and use table service wherever possible.