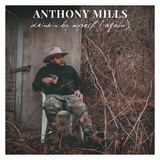 Anthony Mills is releasing an 'anti-social anthem'
letting us know, "it's OK to get your drink on solo".

Anthony Mills is a country artist no matter what you might think. He is a man who has lived a life and has a story to tell. The great-grandchild of middle America's industrial revolution. Born and raised in working class Akron, Ohio with family stretching from Lake Charles, Louisiana to the West Indies to Stockholm, Sweden. Plus, Mills is a character who cut his teeth as a classical voice major at The Manhattan School of Music. Since the late 90s, Mills worked and toured with Harry Belafonte, Amy Winehouse, Krs-One, Sizzla, Grace Bumbry, Leela James and more including writing and top-line EDM anthems for Dada Life and Moonbootica. These experiences forged the character Anthony Mills has become.

It was just 3 years ago when Anthony began to tell his story through his flavor of country music. He released his debut album, 'blue collar work ethic' with the label Icons Creating Evil Art in 2019 giving us a taste of his amazing storytelling capabilities. At the top of 2020, he released the single 'rusty cadillac' (featured by Paste/Noisetrade here). The first single from his upcoming second country album delivers Anthony's deep south background partnered with "up norf” nuances and creating some down home country "drankin" songs.

On newest single, "drinkin by myself (again)”, Anthony Mills explores the social stigma of drinking by yourself. In these times, it can be seen as kind of an "anti-social anthem" as drinking alone has become an unfortunate necessity. This is the second single from Mills' sophomore country album, 'drankin songs of the midwest', a songbook of personal drinkin tales. In Mills own words:

”Getting my drank on no celebration, or anger, or sadness, just outlaw goals”

In acknowledgement to the relevance of the lyrics in this pandemic time, Mills explains further: ”Looking inwards over the years and all the times drinkin has been enjoyed (usually with others) BUT, in my culture it was always a OK to get your drink on solo. Never needed or wanted any kinda pity party, or validation from folk. I been practicing social distancing before the virus.”

Anthony Mills’ latest single, 'drinkin by myself (again)’ will be released on April 10, on all platforms via Icons Creating Evil Art. His sophomore country album, 'drankin songs of the midwest' is coming later this year..