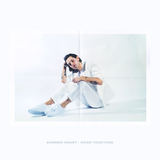 After signing to Icons Creating Evil Art, the Swedish musician and producer known for creating lo-fi nostalgia David Alexander, alias Summer Heart fuses electropop and wistful chill-wave genres in upcoming single ‘Good Together.’ Layered with dream like synths, and distinctive hazy glazed vocals, ‘Good Together’ highlights his creative talent as a lyricist, and his ability to create captivating melodies. Discussing the track, Summer Heart says: "This song is about when you meet a new person that you really like, it feels as if you fit perfectly together and you have like an "us against the world" vibe, but then in the end nothing really comes out of it. Then you might look back and wonder what it would have been like if the two of you had ended up together.” The new track follows on from single ‘Yeah, Alright’, where he teamed up with singer-songwriter MAJRO to create a sound that embraces the positivity of Summer. It’s clear that Alexander is no stranger when it comes to experimenting with his music. Having released his ‘#SongsofSummer’ project, via Kitsune Records last year, the musician challenged himself to put out 12 singles for a year; releasing one per month. In August 2017, Alexander released his second full length ‘101’, a piece of work that was inspired by his time in New York City. Now, he's just finished his forthcoming EP 'Ambitions', which is set to be released in November with a 3rd studio promised for 2021. Summer Heart was supposed to embark on a US tour this spring when the pandemic hit, playing 7 west coast shows, New Colossus Festival and SXSW Festival. While waiting for a new post-pandemic work to arrive, the focus now is to work with some of the best social media teams (The Syndicate in New York) and content creators (Two fully animated music videos) out there to keep building the contact with fans while awaiting opportunities to tour again. Summer Heart’s new single ‘Good Together’ will be available to stream everywhere from 4th September.