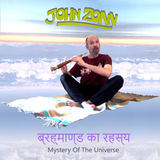 This is a double-A-side single, incorporating two songs - 'Mystery Of The Universe' & 'Back In The 80's'.

Zonn says: "In recent years, a neurological condition has limited my guitar playing and, not wanting to give up and fall by the wayside (plus still being extremely lyrically and musically-driven) I had an idea to adopt a similar approach to my musical recuperation as Rick Allen, the drummer from rock band Def Leppard, who lost his arm in a car crash and yet persevered, with help from a bespoke specially-designed electronic drum kit, to regain his ability to play drums.

Around the same time as my difficulty came to the fore, I heard on the radio that Cliff Richard was due to release an album that included a couple of songs in which he duet-ed with Elvis using old vocal recordings of The King, in a seamless blend of audio electronic wizardry.

Thus, I found myself one day listening to recordings of myself that I'd made back in the Eighties. I was specifically searching for songs where I played guitar on its own, without the interference of other instruments, so that I could digitise and sample the guitar parts to be layered within a multi-track recording - like the aforementioned Cliff Richard / Elvis scenario.

During my research I discovered a few hidden gems, such as an old 4-track recording of me at home performing the guitar part to 'Master Of The Universe' by Hawkwind, and also a recording where I played bass with Dave Acres while he performed his keyboard and synth tune (that I have since named Back In The 80's), back in 1986. Although there are more songs in the archive I thought these two would be a good start to my aim of using old to create new.

I penned different lyrics for the Hawkwind track, to make it 'Mystery Of The Universe' (MOTU), in order to update it for the 2000 & tennies. The original had 7 lines to each of the 2 verses, and no choruses. My new song has 8 lines per each of the 3 verses, with choruses. I also wrote lyrics to accompany Dave Acres' tune - reminiscing on those 'days of yore', back in the 1980s (BITE), when I and the folks I used to hang around with then were still heady teenagers!

So, at this point I had the lyrics and some of the music. Using the copy/cut and paste functions on my laptop, I was able to adjust and edit the arrangements of the tunes, plus add a few extra bits in - like the French woman at the start of 'BITE' who warns listeners to be aware of a forthcoming déjà vu experience! I also gave both songs drum rhythm tracks. Every part of the recordings uses sampled instruments, rather than 'straight' performances. Suffice to say that all-in-all MOTU took about a year to record/produce and BITE took probably over 6 months. This was all part-time."
credits
released November 18, 2018

Recorded and produced by John Zonn.

'Back In The 80's': original music written by Dave Acres, who also did the keyboard, synth & original rhythm track performance. Lyrics and song arrangement written by John Zonn, who also did the vocals, bass, a tiny bit of synth & the complementary rhythm programming. The female vocal was created using 'oddcast.com' and the 'Heart Of Glass' excerpt at the end was by Jimmy Destri.
Cover design by John Zonn. 'Back In The 80's' cover photos taken from the internet. 'Back In the 80's' logo created using 'photofunia.com'.
Huge thanks to Dave Acres for allowing John to use his tune and performance for 'Back In The 80's'.

Thanks to 'Help Musicians UK' for their support with this project.