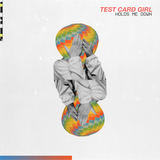 Test Card Girl is a solo project by Manchester singer/songwriter Catherine (Caffs) Burgis. Having spent many hours listening to other people play and sing, Catherine decided to swap the pint glass for the guitar in early 2019 (or at least hold both concurrently) and set off on a songwriting journey into all corners of her mind, simultaneously also becoming a stand up comedian and touring the country with a novelty miniature keyboard. Some would call it a cry for help, but, aged 35, she'd had more than enough of an admin-based existence.

She met her now-producer Dave Fidler after watching a John Bramwell (I Am Kloot) gig at the iconic Trades Club in Hebden Bridge, where she unexpectedly heard herself piping up that she had written some songs. He kindly agreed to listen to them and they have been working together ever since.

Having won and been a finalist in a number of national comedy competitions, Catherine decided to focus solely on music in 2020 and build up more live experience, a decision which immediately co-incided with the dawn of a global pandemic.

Catherine's music ranges from lo-fi bedroom pop to simple indiefolk songs, influenced in equal parts by the standard-issue musical taste of a 90's Manchester teenager; an obsession with the MIDI sounds from keyboards of childhood Christmases past; and the finger-picking guitar style of anyone who can play more than the one pattern she heavily relies on. Major recent influences include Marika Hackman, Susanne Sundfør, Big Thief, Bon Iver, Tallest Man on Earth, Chvrches, Slow Readers Club, Christine and the Queens, IDER, Kate Rusby, Jesca Hoop and Fontaines D.C. but it's an endless daily list....

She is currently recording her debut album in Manchester due for release April 2021 and her first UK launch gigs.

'Holds Me Down' is also available limited edition cassette tape.

"A glorious mess of retro-synth-sonics"- Fresh on the Net

"Not rushed or grabby. Not too much going on, but nor too little. The right balance!"
- Financial Times


"feels so natural, yet so refreshing and new. Refusing to lean into any current lofi indie trends, Test Girl Card brings a joyous, genuinely delightful sound to the table-- a sound that is all too underrated in today’s largely moody indie scene"
- Unheard Gems

"Electronically whimsical in its sound, there is definitely something to be said about the uniqueness that Test Card Girl’s ‘Holds Me Down’ brings to the table"
- IndieTop39

"Sparkling with youthful vibrancy, Test Card Girl's ‘Holds Me Down’ oozes a hopefulness that occasionally teeters on the edge of naivety. A retro-glazed fantasia that relies just as much on its simplicity as it does the smorgasbord of influences that have worked their way in." - Soundwave

"A fantastic mesh of indie, folk, synth and soul all wrapped up in a cute bow".
- A&R Factory